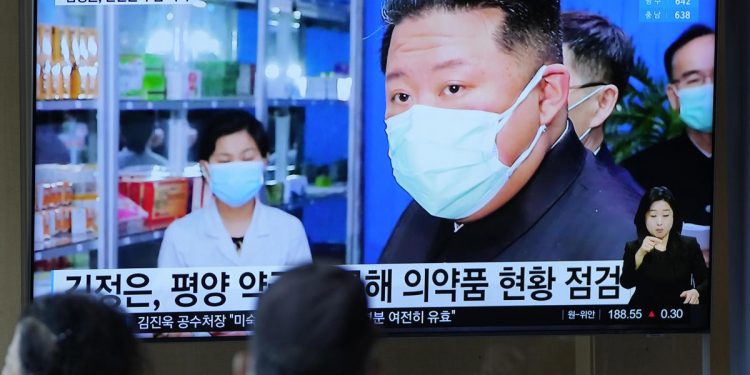 Seoul, South Korea — North Korea on Thursday reported 262,270 more suspected COVID-19 cases as its pandemic caseload neared 2 million – a week after the country acknowledged the outbreak and scrambled to slow infections in its unvaccinated population.

The country is also trying to prevent its fragile economy from deteriorating further, but the outbreak could be worse than officially reported since the country lacks virus tests and other health care resources and may be underreporting deaths to soften the political impact on authoritarian leader Kim Jong Un. North Korea’s anti-virus headquarters reported a single additional death, raising its toll to 63, which experts have said is abnormally small compared to the suspected number of coronavirus infections.

The official Korean Central News Agency said more than 1.98 million people have become sick with fever since late April. Most are believed to have COVID-19, though only a few omicron variant infections have been confirmed. At least 740,160 people are in quarantine, the news agency reported.

Nuclear test in the offing?  North Korea’s outbreak comes amid a provocative streak of weapons demonstrations, including its first test of an intercontinental ballistic missile in nearly five years in March. Experts don’t believe the COVID-19 outbreak will slow Kim’s brinkmanship aimed at pressuring the United States to accept the idea of the North as a nuclear power and negotiating economic and security concessions from a position of strength.

South Korea’s spy agency told lawmakers Thursday it assesses that North Korea has all but finished preparations to conduct a nuclear test, which would be its seventh overall and first since 2017, and only has to determine the timing, according to lawmakers who attended the closed-door briefing. White House national security adviser Jake Sullivan said Wednesday that U.S. intelligence shows there’s a “genuine possibility” that North Korea will conduct another ballistic missile test or nuclear test around President Joe Biden’s visit to South Korea and Japan that begins later this week.

Racing to contain the outbreak  After maintaining a dubious claim that it had kept the virus out of the country for two and a half years, Pyongyang acknowledged its first COVID-19 infections May 12 and has described a rapid spread since. Kim has called the outbreak a “great upheaval,” berated officials for letting the virus spread and restricted the movement of people and supplies between cities and regions. Workers were mobilized to find people with suspected COVID-19 symptoms who were then sent to quarantine – the main method of curbing the outbreak since North Korea is short of medical supplies and intensive care units that lowered COVID-19 hospitalizations and deaths in other nations.

Despite the vast numbers of sick people and the efforts to curb the outbreak, state media describe large groups of workers continuing to gather at farms, mining facilities, power stations and construction sites. Experts say North Korea cannot afford a lockdown that would hinder production in an economy already broken by mismanagement, crippling U.S.-led sanctions over Kim’s nuclear weapons ambitions and pandemic border closures. North Korea also must urgently work to protect its crops from a drought that hit during the crucial rice-planting season – a worrisome development in a country that has long suffered from food insecurity. State media also said Kim’s trophy construction projects, including the building of 10,000 new houses in the town of Hwasong, are being “propelled as scheduled.” “All sectors of the national economy are stepping up the production to the maximum while strictly observing the anti-epidemic steps taken by the party and the state,” Korean Central News Agency reported.

The virus controls at workplaces include separating workers by their job classifications and quarantining worker units at construction sites and in its key metal, chemical, electricity and coal industries, KCNA said. While Pyongyang says more than 1.2 million people have already recovered, it’s clear officials are simply releasing people from shelters or other quarantine facilities like schools after their fevers subside, according to South Korean lawmaker Ha Tae-keung, who attributed the information to the spy agency briefing. Although the North may lack medical equipment, it does seem to have enough thermometers to check temperatures, likely imported from China, Ha said. Kee Park, a global health specialist at Harvard Medical School who has worked on health care projects in North Korea, said the country’s number of new cases should start to slow because of the strengthened preventive measures. But it will be challenging for North Korea to provide treatment for the already large number of people with COVID-19. Deaths may possibly approach tens of thousands, considering the size of its caseload, and international assistance would be crucial, Park said.

“The best way to prevent these deaths are to treat with antivirals like Paxlovid,” which would significantly lower the risk of severe disease or death, Park said. “This is much faster and easier to implement than sending ventilators to build ICU capacity.” Other experts say providing a small number of vaccines for high-risk groups such as the elderly would prevent deaths, though mass vaccinations would be impossible at this stage for the population of 26 million. It’s unclear, however, if North Korea would accept outside help. It already shunned vaccines offered by the U.N.-backed COVAX distribution program, and the nation’s leaders have expressed confidence the country can overcome the crisis on its own. Kim Tae-hyo, deputy national security adviser for South Korean President Yoon Suk Yeol, told reporters on Thursday that North Korea has ignored offers of help from South Korea and the United States to contain the outbreak. Experts have said North Korea may be more willing to accept help from China, its main ally. South Korea’s government had said it couldn’t confirm media reports that North Korea flew planes to bring back emergency supplies from China this week.