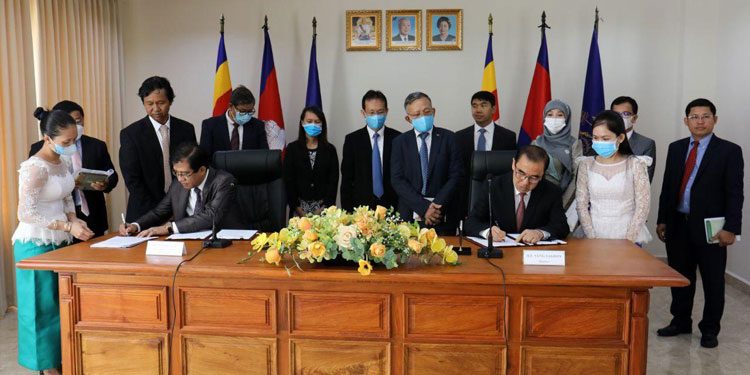 The Ministry of Agriculture, Forestry and Fisheries and the International Rice Research Institute (IRRI) inked their collaborative work plan for 2020-2023 yesterday.

The agreement aims to further strengthen the cooperation between the two organisations for the crops research and development activities that has been going on for many years.

IRRI’s support for Cambodia’s rice sector began in the 1960s, when it trained Cambodian scientists and collected more than 4,000 local rice varieties for conservation in the International Rice Genebank. Then in the late 70s and early 80s, many traditional rice varieties were lost because of conflict and famine. The IRRI was able to repatriate 766 varieties to replenish the country’s rice diversity.

The partnership was formalised with the first memorandum of understanding in 1986 and, through the IRRI’s continued support, Cambodia was able to significantly increase its rice production from 2.4 million tonnes of in 1993 to 10.8 million tonnes in 2019. Transformation in rice-based farming systems have also played a key role in the country’s recent economic development and growth.

According to the collaborative work plan 2020-2023, the IRRI seeks to boost its collaborations with the ministry along with other national partners to achieve key goals.

These include enhancing the commercialisation of the rice sector through value chain assessment and strengthening, and productivity and resiliency through germplasm conservation and utilisation, crop improvement and seed system development.

Veng Sakhon, Minister of Agriculture, Forestry and fisheries, said that over the next four years, both parties will drive the crops production chain and attempt to boost exports.

Sakhon added that the IRRI would help Cambodia to research new types of rice breeding. He added that Cambodia has to find the new rice seedlings to ensure resilience against both climate change and pests.

“While some seedling is of low quality, we also have to further strengthen, and improve our ability to produce the seedling response to market needs and exports,” he added.