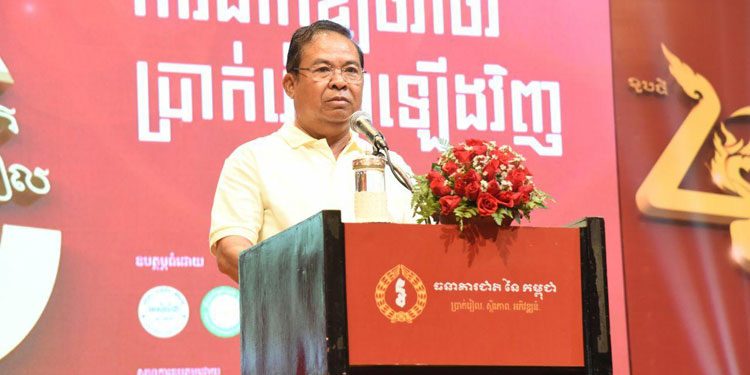 National Bank of Cambodia Governor Chea Chanto said Cambodia needs a strong national currency to strengthen its economic and financial resilience to underlying crises, as well as to support sustainable and inclusive socio-economic growth and development.

He made the remarks at the 40th anniversary of the re-introduction of the riel held in Phnom Penh yesterday.

He added that in the face of a highly uncertain global economic situation and the development of Cambodia’s economic and financial sector, Cambodia faces many challenges and tasks ahead that require more effort from all walks of life to continue to achieve an effective, diversified and inclusive banking system aimed at supporting sustainable growth, increasing people’s incomes, reducing poverty and promoting regional economic and financial integration.

Chanto said considering the importance of the riel (KHR) in the economy since the early 2000s, the government has identified policies to promote the currency as a key priority in the financial sector development strategy. It seeks to move the banking and financial sector forward and strengthen economic resilience.

The National Bank of Cambodia (NBC) and relevant ministries and institutions have continuously contributed to the ongoing improvement of the use of the riel, with the demand for the notes increasing over the last 20 years by an average of 16 percent per annum. The growth in demand for the riel is mainly supported by an increase in public confidence following the Paris Peace Accords in 1991 and subsequent macroeconomic and financial stability, he added.

“I firmly believe that all ministries, institutions, companies, enterprises and stakeholders will continue to actively contribute to the development of the banking system and promote wider use of our national currency, the riel,” Chanto said.

According to Chanto, the Cambodian economy has grown at an average of 7.8 percent with the inflation rate under control around 2.5 percent, while the riel has stabilised around 4,050 per US dollar over the last two decades.

He added international reserves have reached $20 billion, which guarantees the next 10 months of imports of goods and services, more
than 100 times higher than the three-month minimum requirements for developing countries.

He added that more and more private companies are using the local currency for their staff  payroll. However, to encourage more use of the riel, the government should have measures in place that are acceptable to all.

“Transactions under the value of $100 (about 400,000 riel) should be conducted in KHR to increase the use of riel circulation,” he added. “Foreign tourists should exchange US dollars to KHR once they arrive in Cambodia,” he added. “Government should consider the benefits of spending the riel. Therefore, the exchange rate must be stable,” Heng added.

President and Group Managing Director of ACLEDA Bank In Channy congratulated the NBC on its 40th anniversary of the re-introduction of the riel in Cambodia. He said ACLEDA Bank has around $4 billion in its total loan portfolio and it has 15 percent of that in loans in KHR. The bank has a holding of around 20 percent of KHR, a figure that is increasing year-on-year.

“The increase in using more local currency is because of the NBC’s laws and regulations and the monetary policy management [needed] to maintain the growth of the economy as well as well-managed inflation so that trust in the KHR can be maintained. The exchange rate of the KHR against foreign currencies is stable and there is cross-border settlement in riels between Thailand and Cambodia,” Channy said.

According to the NBC, the banking sector has continued to develop strongly and has expanded its services throughout the country. In the last two decades, banking assets have grown by 93 times, lending has risen by 178 times and deposits have increased by 95 times. This growth shows the confidence of the investors and the public in the Cambodian banking and financial system.