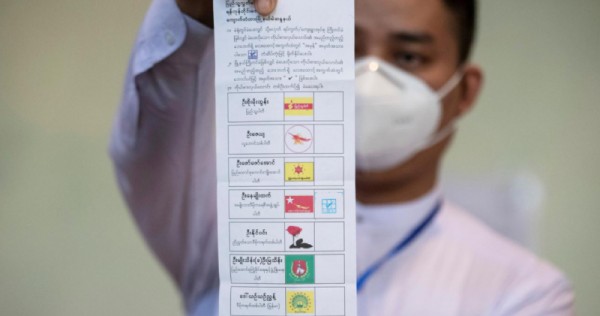 YANGON – Myanmar’s military-backed opposition said on Tuesday (Nov 10) there had been “many contentious events” during a parliamentary election two days ago which the ruling party says it won by a landslide, but offered no immediate evidence of violations.

Mr Than Htay, leader of the Union Solidarity and Development Party (USDP), said in a video on the party’s official Facebook page that it was pursuing legal options and urged viewers to send in evidence of “illegal acts”.

“There were many contentious events during the whole voting process, whether in line with the law or not, and more facts are coming out,” he said, without specifying.

“We will continue to work according to the law to receive the result our supporters want.”

Sunday’s election was seen as a referendum on the fledgling democratic government led by Ms Aung San Suu Kyi and her National League for Democracy (NLD), which remains very popular at home but has seen its overseas reputation battered by accusations of genocide against the Rohingya Muslim minority, which it denies.

The NLD has said it won more than the 322 seats in Parliament needed to form a government, based on data compiled from reports by party agents at polling stations nationwide.

The election commission is yet to announce a final tally, but the several dozen seats it has announced so far put the NLD comfortably ahead.

The commission, which is appointed by the president, was criticised in the run-up to the vote over alleged errors in voter lists, censorship of broadcasts by opposition parties, and the cancellation of voting in areas affected by insurgencies.

A commission spokesman did not answer calls seeking comment.

The NLD said it was ready to cooperate if any reliable evidence of violations was provided.

“We are also ready to resolve it according to the law,” party spokesman Myo Nyunt said by phone.

International and local observers have said the election went smoothly without major irregularities.

The US-based Carter Centre said on Tuesday entry for observers was restricted in three polling stations, but that voting was conducted positively in 94 per cent of stations visited.

Candidates can file objections within 45 days of the results to tribunals appointed by the election commission, but cannot appeal the judgments at an independent court.