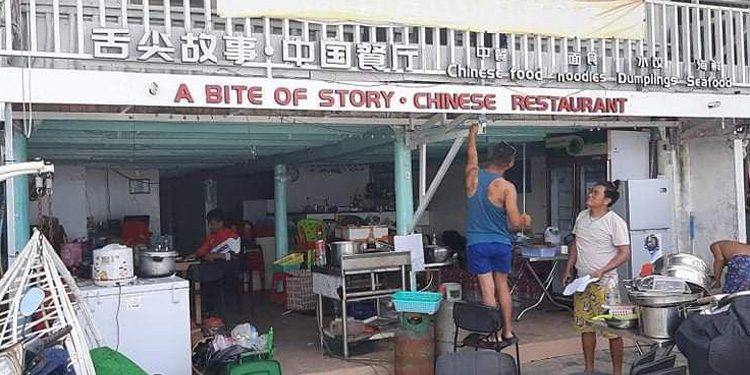 More small scale Chinese businesses are opening up on the islands off the coast of Sihanoukville as Western businesses continue to close with owners blaming high rents and falling Western tourists for the changing demographic.

The reports come after the Royal Group, one of the largest investment companies in Cambodia, announced in 2019 a $285 million investment project had been agreed for the island of Koh Rong.

The investment project is a joint venture between Royal Group and Chinese-owned Royal Galaxy Group to build a resort that consists of five-star hotels, convention centres, duty-free shops, supermarkets and 600 villas.

Jake Scott, the business owner of Bongs Guesthouse M’Pai Bay in Koh Rong Samloem said: “Most of us [current business owners] arrived at Koh Rong in the early 2010s to establish our businesses. Backpackers always want to find the next big thing and it was probably around 2018 that people started looking for other beaches to stay on. With that, Koh Tui on Koh Rong had run its course for the Westerners. The Chinese have moved into the shells that were left behind and are hopefully going to revive the local economy.”

Now with the majority of Western-owned businesses gone from Koh Touch village and
few left fighting to stay open, it’s left space for Chinese businesses to move in. The village now has two Chinese Restaurants and a Chinese KTV with more set to open. General Manager of local businesses Coco Boutique Resort and Buffalo Restaurant said: “I am happy that the Chinese are coming in and trying to do something with the village, even with high rents. It’s not the same place it was three years ago. When I arrived here on this island we had a mix of 17 bars and restaurants in Koh Touch village, now we only have seven. We would rather have Chinese places open and have people here than the place be empty.”

With big investment from the Chinese going into Koh Rong for the likes of five-star resorts and hotels, many Chinese are seeing the opportunity to get in early and establish their smaller businesses for future Chinese tourism. Khmer Times recently reported that more Chinese are returning to Sihanoukville as of the government plans the re-opening of casinos. With Preah Sihanouk provincial authorities calling on business owners to get ready because  more Chinese nationals are taking advantage of direct flights.