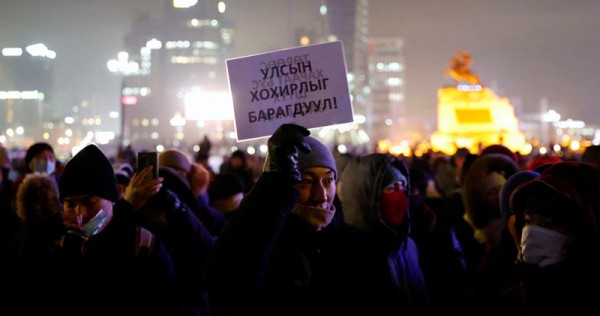 ULAANBAATAR – Mongolian protesters clashed with police as they tried to storm parliament after thousands gathered in freezing temperatures to demonstrate against soaring inflation and government corruption.

The protests began in the capital Ulaanbaatar on Sunday (Dec 4), triggered by allegations that surfaced two months ago of government officials profiting from illegal sales of coal to China, independent broadcaster TenGer TV said.

Demonstrators clashed with police on Monday in front of the Government Palace where parliament sits. Large crowds were seen chanting slogans, demanding officials come out and face the people.

Some later jostled violently with police as they tried to storm the building.

“A lot of government members are richer and live (more) luxurious lives than the citizens, and how could they just be so calm when the citizens are buying bread by (the) slice, not by the loaf? That’s the reason why I’m protesting today for the good of the people,” one protester told TenGer TV.

The broadcaster said the executive committee of the ruling political party summoned an emergency meeting on Tuesday. Details were not immediately available.