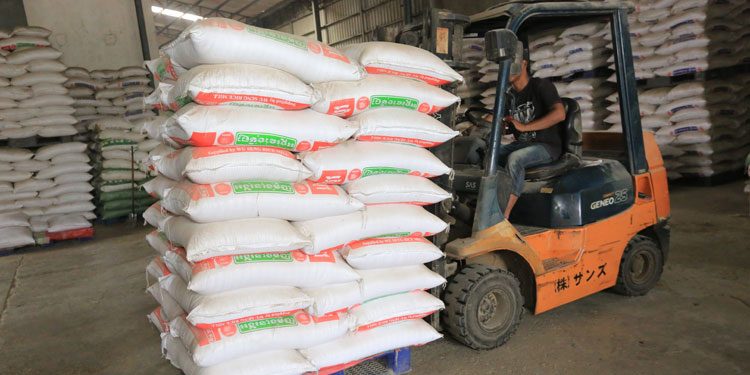 The Minister of Agriculture has blamed a decline in exports of agricultural produce within the last two months on the number of public holidays in the country.

Speaking to about 100 farmers and exporters during the contract-farming signing ceremony in Phnom Penh this week, Veng Sakhon, from the Ministry of Agriculture, Forestry and Fisheries (MAFF) said rice export for the last two months, August and September, fell nearly 30 percent each month.

He said it is different from other countries where every public holiday does not stop exports and imports services. He wants the ministry to remain open during public holidays.

“Our ports and customs are closed during holidays while other countries don’t close theirs and imports and exports carry on as normal.”

Sakhon said it was important to diversify export markets, adding at the end of September, after the Constitution Day break, Cambodia exported 2,550 tonnes of bananas per day to China. He hopes mangoes will also be an attractive crop, noting the Kingdom can produce 1.4 million tonnes a year for the Chinese market.

In August, Cambodia had a one-week holiday, a substitute for the postponed Khmer New Year break in April, which the government cancelled in an attempt to prevent the spread of COVID-19.

Sin Chanthy, president of The Cambodia Logistics Association (CLA), said that authorities need to speed up the paperwork process, which takes a long time, instead of blaming the number of holidays, which are good for the service and hospitality industries.

He said after the government cut six days of public holiday, the number was comparable with other countries in the region.

“Our public holidays are more than in Thailand and they provide benefits for tourism and the hospitality sector even though they slightly affect trade and production,” he said.

“Now we are conducting more agricultural products for export we must keep in mind  the paperwork procedure that makes it harder for exporters,” he said. “We take a long time to obtain permission documents. The government set up one window and one service to facilitate the procedure but actually that is not enough. It takes up to seven days to process the paperwork.”

He said while procedures at customs and excise are improving, some ministries are still slow at issuing necessary documentation.

However, Secretary-General of Cambodia Rice Federation Lun Yeng denied procedures were the problem and the situation is now better than before. He added this downturn also occurred in Thailand during the last few months because of  drought.

“The rice paddy harvest was too late to be processed for export because it was damaged by drought and the farmers had to replant, which made this a slow process and reduced exports for two month,” he said. He also pointed out the price for premium rice fell by 20 percent across the board because consumers turned to white rice to cut costs because of the effects of COVID-19, with people losing jobs or taking pay cuts.