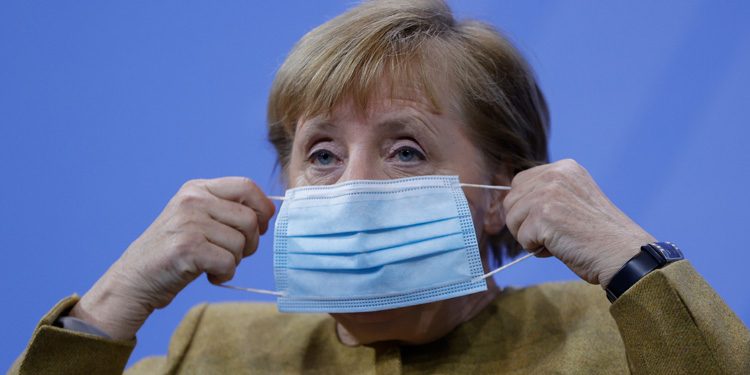 0
SHARES
13
VIEWS
Share on FacebookShare on Twitter
AFP – German Chancellor Angela Merkel held crisis talks yesterday with regional leaders of the nation’s 16 states to agree tougher curbs including the closure of shops ahead of Christmas, as Coronavirus infections surge unabated.

The drastic measures hitting shops other than those selling essential goods would be imposed from Wednesday until at least Jan 10, according to a draft by Merkel’s office.

Schools could also be shut, sending pupils into homeschooling, while companies are requested to allow employees to work from home during the period.

Bavaria State Premier Markus Soeder, who has been pushing for tougher measures, voiced support for the measures.

“The numbers are worse than ever. We mustn’t allow ourselves to get bogged down by individual measures,” he told Welt am Sonntag newspaper.

Along with Merkel, Soeder has for weeks been seeking tougher restrictions, warning that the current round of shutdowns hitting theatres, cinemas, gyms and indoor dining was not far-reaching enough.

But the implementation of the restrictions are in the hands of individual states and some regions where infection levels were lower had been resistant to impose tough curbs.

The mood however tipped over in the last week after Germany recorded new daily death tolls reaching close to 600.

The country’s disease control agency chief Lothar Wieler warned on Thursday that the infections trend had taken a worrying turn.

“The rise in numbers is worrying,” said Robert Koch Institute president Wieler, warning that after plateauing for a few weeks, “the course of infections could tip over again” into exponential growth.

Germany has imposed far less stringent shutdown rules than other major European nations after coming through the first wave of the pandemic relatively unscathed.

But Europe’s biggest economy has been severely hit by a second wave with daily new infections more than three times that of the peak in the spring.

Germany recorded another 20,200 new COVID cases over the past 24 hours, reaching a total of 1,320,716 cases, according to RKI data published yesterday.

Another 321 patients died from the disease from a day earlier, bringing the total number dead to 21,787.

In a hard-hitting speech before the Bundestag on Wednesday, Merkel issued a stark warning to Germans ahead of the Christmas holiday season when families are expected to gather.

“If we have too many contacts before Christmas and it ends up being the last Christmas with the grandparents, then we’d really have failed,” she said.

Ahead of the talks, Germany’s hardest-hit states have already ordered new measures.

Saxony state, where in some areas incidence rates have hit 500 per 100,000, will keep shops and schools shut from today.

A curfew will also kick in from 10pm to 6am.