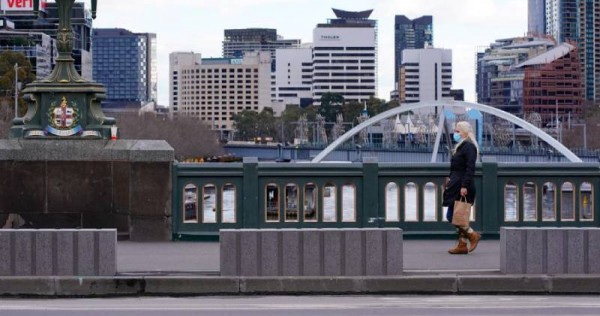 Golf balls, batteries and bottles were among the items thrown at police during the protests held in defiance of stay-at-home orders after a two week closure of building sites to rein in infections, which rose again in the state of Victoria.

Police are bracing for more demonstrations in the next few days, said deputy commissioner Ross Guenther, adding that the motives of some participants had seemed unclear.

“There weren’t as many tradies involved…there are other small breakaway groups that see benefit in hijacking these things,” Guenther told reporters.

“We’ve got plenty of resources. We will vary our tactics tomorrow, if that is what we need to do, but of course, my message is, ‘Don’t come into the city.'”

Authorities aim to resume daily activities in Sydney and Melbourne in a staggered fashion, easing some curbs when the share of fully vaccinated adults in the population reaches 70 per cent, which is expected next month.

Further relaxations will follow when the figure hits 80 per cent.

Some 54 per cent of people aged 16 and above are fully vaccinated in the most populous state of New South Wales and 45 per cent in the southeastern state of Victoria.

Victoria recorded 628 new infections on Wednesday, the year’s biggest one day rise, exceeding the previous high of 603 a day before. New South Wales, whose capital is Sydney, had a total of 1,035 new infections, up from 1,022 on Tuesday.

Australia’s tally of infections stands at about 90,300, including 1,186 deaths, with eight new deaths reported.

Cambodia’s economy forecasted to grow by 5.5 percent in 2022 despite gloom this year