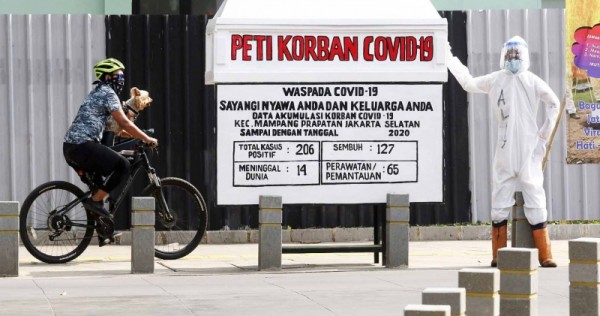 Recent research has shown that many members of the public in Jakarta and East Java assume they are immune to Covid-19 or even doubt there is a pandemic at all, Covid-19 task force chief Doni Monardo has said.

Doni, who also chairs the National Disaster Mitigation Agency (BNPB), said the study was carried out in five provinces, with Jakarta claiming the number one spot and East Java number two in terms of public denial regarding the coronavirus outbreak.

“So, if we look at today’s high numbers of cases in Jakarta and East Java, perhaps the data collected may be quite accurate,” Doni said in a meeting with the House of Representatives on Thursday, as quoted by kompas.com .

Doni, however, did not reveal the details of the study that he referred to.

The other three provinces they collected the data from were West Java, Central Java and South Kalimantan, where many residents also assumed they were immune to Covid-19, he said.

Those three provinces have also been hit hard by the pandemic.

He went on to say that the task force would deploy a joint team to educate the people in those provinces.

As of Thursday, Indonesia had recorded 184,268 cases, with 132,055 recoveries and 7,750 deaths. The country has logged several record-high numbers in the past week, with the highest daily toll of 3,622 new cases recorded on Thursday.

Phuket to reopen on Oct 1 for long-stay tourists