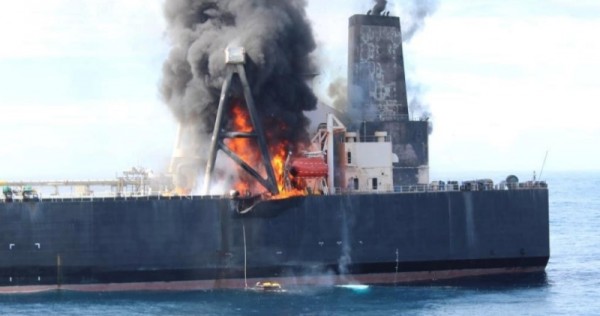 COLOMBO – A Filipino crew member missing from a supertanker that caught fire off the Sri Lankan coast is presumed dead, a spokesman for the navy of the Indian Ocean nation said on Friday.

The fire was still raging on the New Diamond tanker carrying about 2 million barrels of oil, said the spokesman, Captain Indika de Silva. There were 23 crew on board.

The fire that broke in the engine room on Thursday morning had spread to the bridge of the ship, chartered by Indian Oil Corp (IOC).

“The missing Filipino sailor is presumed dead. He was badly injured when a boiler exploded,” de Silva told Reuters, citing crew who were rescued.

There were 5 Greek and 18 Philippine nationals among the crew. One of them was injured and he was airlifted out of the ship and the rest were accounted for.

The ship had sailed from the port of Mina Al Ahmadi in Kuwait, loaded with Kuwait Export Crude, Refinitiv Eikon tracking data showed. It was heading for the Indian port of Paradip, where state-run IOC has a 300,000 barrel-per-day refinery.