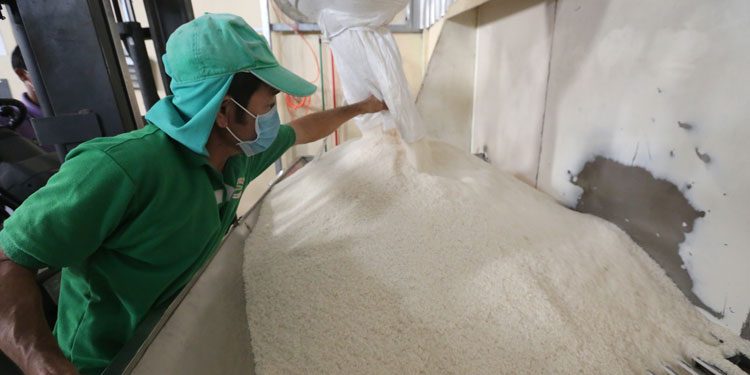 With about 80 percent of its total exports being garments and textiles, mostly under the trade preferences provided by developed economies, the government is now boosting agricultural products through negotiating FTAs after the country officially signed a bilateral FTA with China (CCFTA) on Oct 12.

However, Cambodia’s rice is excluded from the list of item products under the CCFTA because the country has received a quota framework for exports to China.

“In negotiating FTAs, countries need to put their best foot forward, touting products that meet quality and regulatory standards of the importing country, ensure that the demand exists and also consider the limitation and advantages of quotas and tariffs.” He said the bilateral trade relationship is reflective of Cambodia’s garment driven economy, with Cambodia’s main imports from China being fabrics, fibres, machinery and cotton and main exports being apparel and artificial fur.

Galliano said while the present realities of China’s rising foreign investment is the greatest benefit of the commercial relationship – a figure that reached $3.5 billion in 2019 – the Kingdom’s trade is still heavily reliant on exporting to the US and eurozones,” he added.

Chheng Kimlong, second vice-president of Asian Vision Institute (AVI), said that to go beyond agriculture in a short time is not possible. However, Cambodia will have to expand and diversify more export markets, undertake greater and faster investment in technological adoptions, promote local small and medium enterprises  (SMEs) and economic diversification of the economic growth base and enhance the standard and quality and standard of ease of doing business.

“The Cambodia-China FTA would seek the opening up of the Chinese market for Cambodian products and thus it will push greater private domestic investment and attract more investment into Cambodia,” he said.

He said sanitary and phytosanitary issues will remain a key topic to address because China has its own standards and certification system.

However, because both countries have strong and close political and economic cooperation, as well as having a long history of brotherhood, trade and trade-related issues will be addressed in good time and the signing of the FTA has clearly indicated the strong will of the two nations.

Under the CCFTA, Cambodia can trade 340 products more than Asean-China FTA. However, the actual products so far have not yet been officially released.

Undersecretary of State and spokesperson at the Ministry of Commerce (MOC) Penn Sovicheat declined to provide more details at the movement, saying that the ministry needs to wait until the agreement has come into effect.

Cambodian agricultural products such as peppers, bananas, mangoes, longans, cashew nuts, rubber and cassava have the most potential for export because they have the greatest value.

Cassava is the country’s second agricultural product after rice. However, the products are in limbo because the sector has remained hindered by factors such as lack of processing investment, high cost of production and transportation, while markets mostly depend on neighbouring countries to which to export raw materials.

The country is negotiating an FTA with South Korea, while looking for more FTAs with dozens of countries in the region.