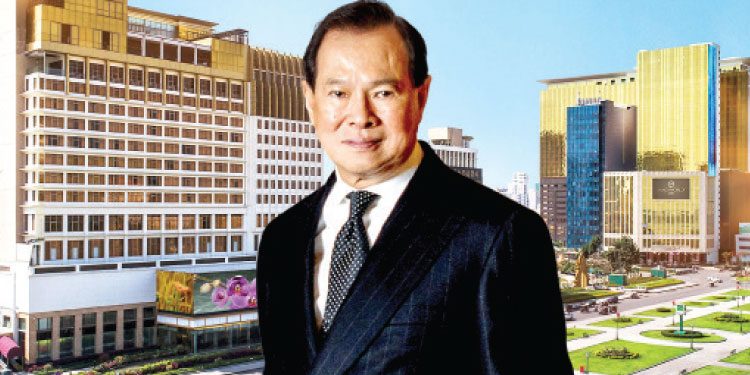 The founder of NagaCorp, the multi-award-winning integrated resort in Cambodia, has received yet more coveted recognition and set the standards of his company from humble beginnings to being  one of  the world’s most famous  companies in management and excellence in corporate governance.

The untiring visionary, Tan Sri Dato Dr Chen Lip Keong, has been awarded Best CEO In Asia Excellence Awards (Gaming and Loudening) by all the noted analysts in the world, at the prestigious 10th Asian Excellence Awards (AEA) 2020, held on Oct 20 and organised by the world-famous Institutional Investor Corporate Governance Asia, the most authoritative Geneva-based, Institution Investors on corporate governance covering Hong Kong and Asia.

This year, a total of 1,921 portfolio managers and buy-side analysts, and 611 sell-side analysts participated in the 2020 All-Asia Executive Team Honoured Companies survey. The 1,472 companies nominated across 18 sectors this year were rated on nine core areas, including: (1) Accessibility of Senior Executives; (2) Execution of Strategy; (3) Well Informed and Empowered IR Team; (4) Productivity of NDR/Conferences/Calls;(5) Responsiveness; (6) Business and Market Knowledge; (7) Consistency and Granularity; (8) ESG Information and (9) Timeliness of Disclosure.

The 10th Asian Excellence Awards (AEA) 2020, held  on Oct 20 and organised by the world-famous Institutional Investor Corporate Governance Asia, has put Tan Sri Dato Dr Chen Lip Keong ($5.3 billion Forbes 2019, fourth richest in Malaysia)   and  Cambodia on the world map in term of governance  by successfully leading and steering NagaCorp from its humble beginnings in the mid-1990s, operating from a floating resort berthed on the Mekong to the Jewel of the Mekong region with the multiple-award-winning NagaWorld Integrated Resort, the country’s largest, as well as, Phnom Penh’s only integrated hotel-casino entertainment complex, within 25 years. He also led NagaCorp, the owners of NagaWorld, to become the first IPO gaming company to be listed in the Hong Kong Stock Exchange in 2006 and, with this, became the first company with operations in Cambodia to be listed in the outside world

The entrepreneurial soul that he is, Chen, 72, today has seen NagaCorp becoming a star performer with an annual revenue of almost $1.8 billion, up 19 percent from last year, and a market capitalisation of $6.2 billion. He has also built NagaWorld to become the largest private sector employer in the country and also its largest tax payer.

Building on the concept of “Prosper thy Neighbour” Chen ventured into the gaming and entertainment industry in Cambodia in the early ‘90s, long before anyone else, while the country was still struggling with a civil war, and turned the banks of the mighty Mekong into the Jewel of Asia with his visionary concept for Naga1, Naga2. He now oversees the construction of Naga3.

In the process, he has put Phnom Penh, the capital of Cambodia, firmly on the global map.

“Dr. Chen was in the right place at the right time,” says Michael Zhu, senior vice-president at US gaming consultancy, The Innovation Group. With that introduction from one of the gurus in the gaming industry in the world, Chen set out to build an empire, driven by his unsurmountable passion and his pursuit of excellence and unparalleled vision to build NagaWorld into an integrated mecca of a resort.

Innovation drives Chen and this led to the country’s first underground shopping mall, the Naga City Walk, four  tower blocks of hotels comprising 1,500 rooms, the sparkling golden facade of Naga2 and, by the end of the 2025, the sprawling Naga3, epitomising NagaWorld as the phoenix which rose from the banks of the Mekong into the region’s largest integrated resort within a relatively short span of 30 years.

Winning the Asian Excellence Award adds another feather to Chen’s many achievements because the prestigious award has highly rigid selection and judging criteria and to even qualify for one is an achievement itself.

And NagaWorld under the stewardship of Chen has won multiple awards in multiple categories in the 2020 award, the jewel of which is the award for Asia’s Best CEO.

According to Corporate Governance Asia, these awards are in the tradition of the high standards set and upheld by the authoritative voice in corporate governance practices in the region practised by the organiser.

These honours are designed to inspire excellence among the different layers in corporate hierarchy, especially now that Asia continues to gain further recognition in the global arena as a favoured investment destination in view of its robust economic growth.

Who else but Chen, who exemplifies all these criteria, put a once-Third World country firmly on investors’ maps across the globe, built an empire which powers a nation and created thousands of jobs for people who have been schooled and tooled with the skills and knowledge of the hospitality industry and more?