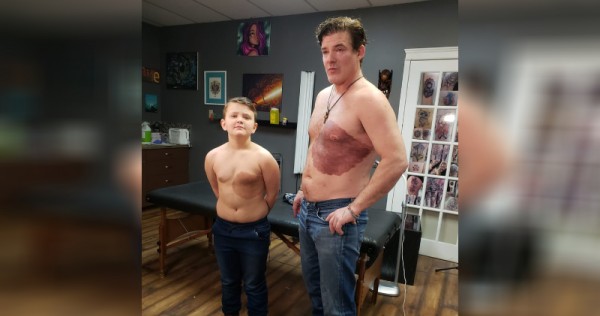 A Canadian father endured painful hours under a tattoo needle to help his “self-conscious” son accept a birthmark on his torso.

Edmonton-based Derek Prue Sr was inspired to get inked after noticing his son did not want to take off his shirt when he went swimming.

“I knew he was self-conscious and that made me want just to show him that he wasn’t the only one, like, we both have the same mark,” Prue said. The inking was much more intense than he anticipated, he said.

Prue unveiled the surprise to his son, also named Derek, as he played in a hotel pool earlier this month.

“He took off his shirt, and then there was a huge tattoo of my birthmark there,” the 8-year-old boy recalled, adding he felt happy – and a little confused.

The dad’s red-wine colored tattoo covers part of his chest and belly and extends under his left arm. The dad is much larger than the son; so the tattoo had to be larger, too, to be in proportion.

No matter where on the body, the inking hurts, said the artist, Tony Gibbert, owner of Juicy Quill Tattoo Studio in Stony Plain, Alberta.

“Pretty much everywhere he wants to get a tattoo is all, like, just pain,” Gibbert said, laughing. “None of it’s easy.”

Thai authorities to clamp down on polluters as haze chokes Bangkok