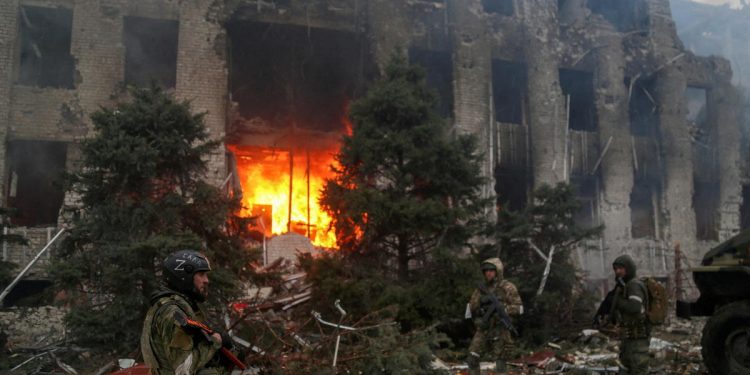 Ukraine said Wednesday it had exchanged with Moscow the remains of dozens of soldiers killed during Russia’s invasion, including forces who died fighting in the Azovstal steel plant in Mariupol.

“Another exchange of bodies of deceased soldiers has taken place: 50 fallen heroes have been returned,” Ukraine’s reintegration ministry, which is responsible for territory under Russia’s control, said in a statement.

The ministry said the exchange took place on the front lines near the central city of Zaporizhzhia and it had been an even swap of 50 bodies on both sides.

It said 37 of those returned died fighting in Azovstal, the last point of resistance in the strategic port city of Mariupol captured by Russia after a months-long operation at the end of May.

The exchange comes after a first swap was announced on June 4 by the reintegration ministry. It said that several days earlier, on June 2, the remains of 160 Ukrainian soldiers were swapped with Moscow.

The Association of Families of Azovstal Defenders, an advocacy group, said this week those bodies had been returned to Kyiv and that 30% had died at Azovstal.

The ministry’s statement Wednesday said the process of returning the bodies of killed Ukrainian soldiers was ongoing.

A senior official in eastern Ukraine says Russia is sending more troops into the country in a bid to capture another key city. The governor of the Luhansk region, in Ukraine’s eastern industrial heartland of Donbas, says Ukrainian forces are having more and more trouble keeping the Russian forces at bay. President Volodymyr Zelenskyy has said that Russian forces now control 20% of his country — a vast swath of the east, along Russia’s border.