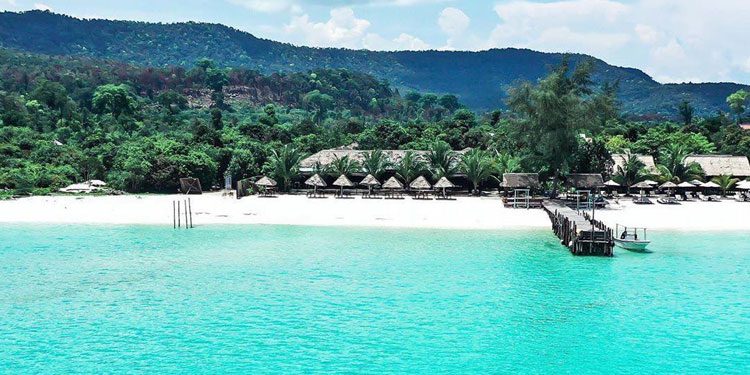 A date has now been set for the completion of a 1.25 megawatt (mW) solar power project currently being constructed on the southern island of Koh Rong Sanloem after global travel restrictions and lockdowns caused multiple delays.

The power project that was signed off earlier this year is progressing well and the project should be ready for operation by June 2021 according to Total Solar Distributed Generation (DG)  and Canopy Power, the two companies working together to bring the project to light.

Overall the solar photovoltaic system will provide in excess of 50 percent of the island’s electricity demand.

Daniel Rye, engineering director of Canopy Power, said: “We have been working on this project for more than a year. The construction is under way. Up until now, there has been a full feasibility process that led to the project being approved. Since then the contracting, design and equipment sourcing has been ongoing. There was some disruption because of the global travel restrictions and lockdowns, but we are now back on track. Land preparation is almost complete and we expect equipment to reach site early in 2021 with the system planned to go into operation in June 2021.”

The project will be constructed as two standalone solar-based micro-grids and is an investment by Total Solar (DG), a wholly-owned affiliate of Total, which is working in partnership with Canopy Power. Total SolarDG is a wholly-owned affiliate of Total, dedicated to distributed solar energy. In Southeast Asia, it has been active since 2018 and is one of the major, international providers of fully integrated solar solutions for the commercial and industrial sectors.

Total (TC) is the world’s fourth-largest oil and gas company, with more than $171 billion in revenue and 100,000 employees in more than 130 countries. TC has been officially operating in Cambodia since 1993. Throughout the country, TC has been involved in marketing various petroleum products and services to its customers in both the private and public sectors.

Canopy Power, a start-up headquartered in Singapore which has recently completed microgrid projects including solar and battery energy storage, for luxury resorts in South East Asia, says it wants to take the technology and its concepts into a number of other sectors.

A megawatt (mW) is a unit for measuring power and represents 1 million watts which is equivalent to the energy used by 330 average homes for one hour.

The two companies have worked on other similar projects in other countries across Asia however this is the largest project to date.

“We have built systems in Indonesia, Malaysia and Myanmar to date. The system on Koh Rong Sanloem will be the largest we have undertaken to date but, in terms of concept, it is very similar. We take care of these systems remotely using technology such as microgrid asset management platforms, which provide us with full operational visibility and enable features that assist with predictive maintenance and component performance analysis. All of the systems that we have set up are performing above slightly above our expectations.” Rye went on to say.

Koh Rong Sanloem is 25 kilometres (km) off the coast of Sihanoukville. It is around nine km long, four km wide and one km wide at its narrowest point. It has a fast-growing population of 300. Once the project is complete on the island the current energy situation will be improved drastically as well as the environmental benefits.

“Once the system is commissioned, the benefits should be seen immediately. The reduction in electricity generation cost compared with the current situation whereby each hotel runs its own diesel generator is quite significant. We expect that the electricity retailer will pass on savings to property owners.”

“Having a stable 24-hour electricity supply directly into each property via the new microgrid distribution system will be hugely beneficial. Property owners will no longer need to take delivery of diesel fuel in hundreds of canisters twice a week or maintain their generators. The elimination of noise and air pollution from the premises of each property will be an environmental benefit and hopefully have a positive impact on tourism,” Rye concluded.

The news comes at a time when Cambodia has a clean energy month running, providing different workshops to educate people in both English and Khmer on the benefits of clean energy and how people can make a difference.