Journey to circular economy model is ‘well under way’ in Cambodia 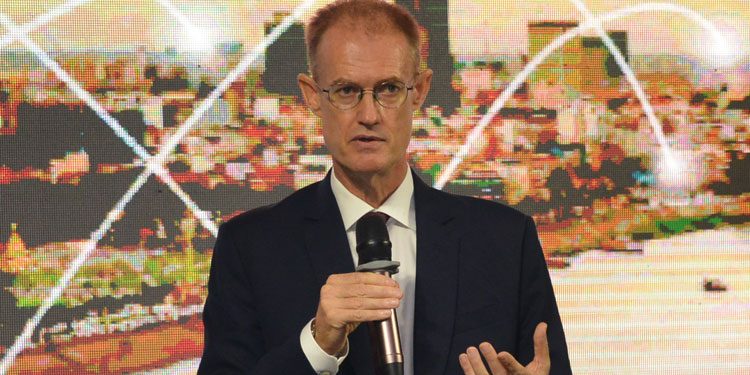 Momentum towards embracing the circular economy concept is gaining in the Kingdom. Circular economies promote the use of sustainable materials and clean, renewable energy such as solar and wind, improving efficiency for production, adopting sustainable consumption practices and practising the efficient recycling of materials as well as energy recovery.

The government is currently preparing policy and strategy that will promote the circular economy model to the business, investment and local environmental communities.

She added that although Cambodia has not yet developed specific policy in its promotion, the government has introduced related policies and regulations toward the circular economy and is working with the private sector to that end

“We are moving step-by-step on the circular economy model. It begins by turning change into an actual habit as we move away from the linear economy model, a model that that relies on the extraction of resources to create products that once consumed, need to be disposed of,” she added.

Lina said businesses people and investors who put the circular economy model in place realise real advantages that not only help their business with cost savings in the production process but also help society by promoting public health, creating jobs and saving resources.

“We cannot define when the country will have fully implemented the circular economy model by  policy support alone, but through our education and promotion campaign on the circular economy model. We have encouraged businesspeople, investors and the public to join us in government who see it as the way of the future  We are encouraged by the number of businesses and investors who are taking environmental issues seriously, setting them as a priority in how they run their enterprises and portfolios,” she added.

Lina added the government is preparing a policy and strategic plan on how the circular economy model can reduce the impact of climate change and misuse of natural resources that result from linear economy practices, as well as a policy on waste management” she said.

She added that the Ministry of Environment has also set up the indicators and criteria for evaluation of the business model in the public, private and community sector implementation of the circular business model.

“We will arrange the policy to encourage and work with the private sector to implement and promote the circular economy model,” she added.

Nick Beresford, resident representative of the United Nations Development Programme (UNDP) in Cambodia, said that a circular economy has strong potential to spark positive environmental and economic change. He added it can guide sustainable development pathways for countries at all income levels, including developing countries such as Cambodia.

He said that today many countries are in the process of developing or implementing circular economy policies. The goal is to transition from the linear economy approach while facilitating a green recovery from the devastating COVID-19 pandemic.

He added, “It can also reduce the volume of waste, greenhouse gas emissions and air pollution. In addition, improved efficiency can reduce the costs of production and increase the competitiveness of businesses. New jobs can be created by developing new value chains in renewable energy, recycling, energy recovery and other sectors.”

Roongrote Rangsiyopash, president and chief executive officer of SCG, Thailand’s largest conglomerate which specialises in construction materials and which also has business operations in Cambodia, said that the environmental situation has become more severe and the severity is not just limited to the degree of the issue.

He noted that the pandemic has shown people to wake up, to see and to prepare for problems they have never seen before in the areas of environment, waste and natural resources usage because these will all become issues in the near future and that the circular economy is one of the solutions available to solving the global emergency.

“If we cannot carry out the circular economy, applying it to ourselves, to our work and to our new lifestyle, problems will become more severe. I believe that everybody has their part in driving the economy and putting the circular economy into practice,” Rangsiyopash said.

NCSD’s deputy secretary-general Lina added there are a lot of benefits to be realised by transforming from a linear to a circular economy. First, these are benefits to the environment and human health as we think thoroughly about the use of natural resources, energy and raw materials.

Second, transformation will contribute to reducing greenhouses emissions which affect soil and earth quality, reduce air and water pollution as well as limiting waste, all of which benefit public health. Third, there will be an efficient use of raw material and sustainable levels of energy consumption that will reduce the cost of production for those that operate green businesses.

The UNDP, however, pointed out that what the Kingdom needs to overcome in moving towards the circular economy model is recognition of it as a policy issue. In many countries, the traditional view towards development is one of promoting fast growth and prosperity in the now and dealing with  the clean-up later.

“If you ask policy makers in countries that have followed that path, such as China, many would say that it is actually a lot more expensive to go full speed ahead without taking sustainability and environmental concerns into account as soon as possible,” Beresford added.

He also said the “clean up later” approach is very difficult and the cost of the clean-up necessary after a rapid economic growth model that has not taken into account sustainable environmental measures is definitely the far more expensive route.

The Strategy and Action Plan is of critical importance because it outlines the overall roadmap and priority actions that will move Cambodia towards a circular economy, said Moeko Saito Jensen, environmental policy specialist, UNDP, in Cambodia.

She added the effectiveness of the new strategy will depend on improved awareness and behavioural change among stakeholders. Jensen added it is important that people learn to understand the relations between their actions and environmental consequences, so they can participate in shaping a sustainable future for the country.

She added that fundamental to the transition to a circular economy is effective stakeholder involvement. Government has an important role in creating an enabling environment by developing regulations and providing economic and financial incentives.

Academic institutions are equally important because they improve and share the knowledge that will build the capacities necessary to adopt circular economy approaches. The private sector has to drive innovation, mobilise scalable investments and transform its business models. Finally, citizens must adopt sustainable consumption lifestyles.