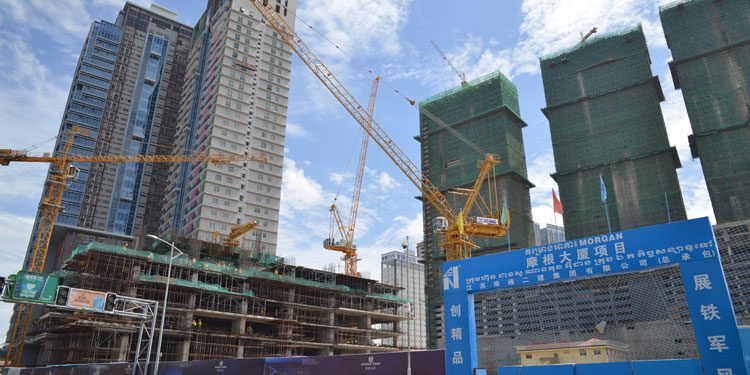 The Kingdom’s construction sector is being boosted by local investors who have stepped in to replace foreign investment projects hindered by COVID-19, according to insiders.

Chiv Sivpheng, general manager of Cambodia Constructors Association, says that the pandemic has led to a sharp decline in foreign investments in large construction projects. “Most of the projects that are currently under way right now are funded by local investors.  This domestic bloc has boosted the sector during this troubled time and helped to maintain economic stability by providing jobs,” he said.

Sivpheng noted that while travel restrictions have largely kept foreign investors from the Kingdom, local investors have been able to continue with their projects more or less unimpeded by the pandemic.

“Construction activity fuelled by local investment tends towards smaller scale residential and borey projects.” He added that the large-scale developments currently postponed are primarily those driven by Chinese and South Korea interests.

“While some larger scale projects have continued to progress slowly, most of them are delayed for the foreseeable future. Foreign investors hampered by travel restrictions are loathe to progress with construction activity when their ability to move freely between the countries in which their projects are under way or planned for is so difficult,” he said.

A report from the Ministry of Land Management, Urban Planning and Construction (MLMUP) shows that capital investment in the country’s construction sector during the first nine months of 2020 totalled $5.8 billion, falling more than 9 percent from the $6.5 billion reached in the same period last year.

This is despite a report showing an increase in project approvals to 3,739 construction plans, an increase of 8.9 percent from 2019.

Sivpheng hopes that post-pandemic, the huge projects planned and approved will be back online.  One issue that may need to be overcome is ensuring that the supply line of construction materials, particularly those sourced from outside Cambodia and the region is restored without delay.

Cambodia produces many of the materials needed, including cement, so the sector may not face a drastic shortage of the supplies, he added.

Sihanoukville, which is home to the country’s second-most active construction sector after Phnom Penh, has reported diminished progress since the government banned online gambling and was then hit by COVID-19.

He pointed out, though, that the global virus has affected all sectors locally, not just construction and tourism.

“Some Chinese have come back to Preah Sihanouk, mostly investors, workers, company staff and even a few tourists as well. But most of them are not here for construction sector-related purposes. They’ve come back to manage their factories and companies in the special economic zone and take charge of their businesses as they become busier or reopen,” he said.

Phearum said that like in Phnom Penh, most of the large construction projects in Sihanoukville are owned by Chinese interests and that local investors are working on small projects approved at the provincial level.

“Both types of projects, foreign and local owned, have seen little activity, though, since the virus outbreak,” he said.

The Kingdom’s construction sector provided more than 170,000 jobs on average per day across the country during the first half of 2020, an increase from 134,000 compared with the same period last year, according to figures from MLMUPC. The report shows that in Phnom Penh alone, the sector provided between 24,130  and 24,500 jobs per day.

Education on energy in Cambodia is key to Cambodia’s Industry 4.0 future

Journey to circular economy model is ‘well under way’ in Cambodia