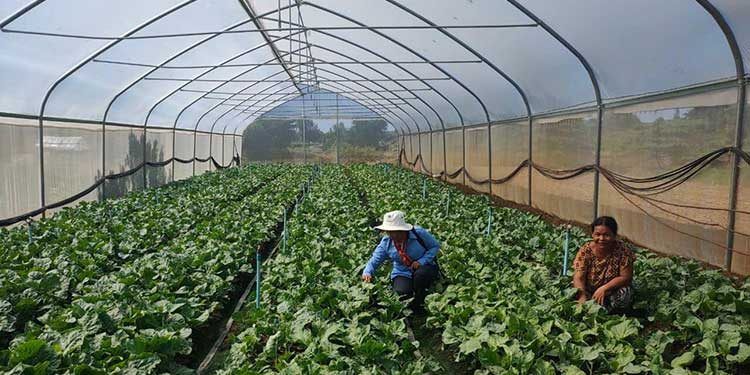 Japan’s Yamato Green, a well-known agriculture development company especially in safe vegetable production, has stated its intention to support the Ministry of Tourism to promote green belt development in Cambodia related to tourism, society and the economy.

The remarks were made during the meeting between Nabeshima Katsuhito, chief executive officer of Yamato Green, and Thong Khon, the minister of tourism.

Makatsuheito said that through the Green Belt Development project in Cambodia, which involves tourism, Yamato Green will turn Cambodia’s agricultural products into “agri-tourism” or rural tourism, so that both national and international tourists can eat local food at different tourism sites safely. “On top of this, the tourists can also witness cultivation techniques and the care of crops directly,” Makatsuheito said

Khon has highlighted the rich potential of Cambodia, which is conducive to investment in tourism, especially ecotourism, agri-tourism as well as rural tourism.

He added that in the context of COVID-19, ecotourism, agri-tourism and rural tourism are being globally recognised and promoted.

“This eco-tourism development project, agri-tourism as well as rural tourism, will bring benefits to the people of Cambodia and the companies that have  invested in it,” he said.

Yamato Green has been successfully developing agro-tourism and ecotourism in Battambang and Mondulkiri provinces.

Top Sopeak, secretary of state of the Ministry of Tourism, said Yamato Green has invested successfully in the agriculture sector, especially in safe vegetable production and it also has 16 subsidiary companies to supply agriculture machinery, consultation, seedling, credit, local transport   as well as exports.

Because this project is related to tourism, Yamato Green has initiated a collaboration with the Ministry of Tourism to create new tourism products by bringing tourists to see the safe growing of  vegetables, Sopheak said.

“This project is aligned with the policies and the strategies of the Ministry of Tourism because the government has been preparing a master plan for the development of Mondulkiri, Siem Reap  as well as Kep,” he added.

“In the master plan we are preparing we mention the green belt. The green belt came about through the development of the tourism community, agri-tourism and rural tourism to create employment in the community.

Both parties agreed to work on this job to expand the growing of safe vegetables in Siem Reap and Kampong Thom and signed a memorandum of understanding with Yamato Green to develop the green belt,” Sopheak said.

Thourn Sinan, chairman of the Pacific Asia Tourism Association Cambodia Chapter, welcomed the project. He said that in other countries, the green belt is a special programme for the government to promote or support some projects.