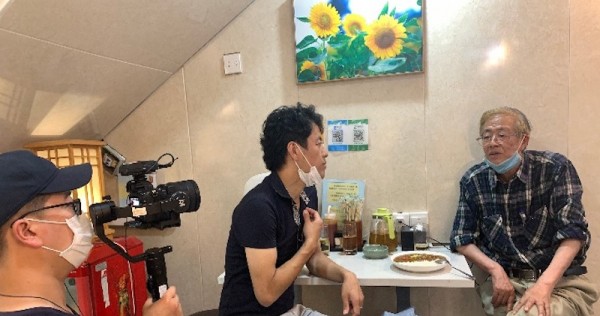 Long Time No See, Wuhan, a documentary featuring 10 stories of 10 families in Wuhan, the capital of Central China’s Hubei province, the hardest-hit region in China by Covid-19, was viewed more than 25 million times in its first 24 hours online in late June.

The film was produced by Takeuchi Ryo, a director from Japan.

“I thought people would be impatient to watch an hour-long documentary, however, after I uploaded it to major online video platforms in China, I found the comments were too many to reply,” Takeuchi said.

On May 15, Takeuchi called for volunteers living in the city to share their life experience after the virus outbreak on China’s Twitter-like Weibo. After preparing for two weeks, Takeuchi arrived in Wuhan with his team to interview 10 selected families.

“Actually, I was thinking about visiting in January and February since there were many rumours about the city and the people living there, but counterviews appeared saying the city is still dangerous, so I am grateful that I can visit the city after waiting for four months,” Takeuchi said.

On June 1, the team arrived in Wuhan, and without any preconceive notion, they started to film.

“In my imagination, people would still be nervous after suffering such a big incident, but when I arrived, I found everything was in order and after checking my identification, I had no trouble getting into the city,” Takeuchi said.

“At night, when we were out for a late snack, we found many people were there and eating happily together, and it was this time I was finally convinced that the city is safe,” he added.

Though the situation is getting better in Wuhan, Takeuchi still found influences brought on by the virus. The words of the first man he interviewed were, “do not be worried, I have done the nucleic acid test, and it is negative”.

As shooting progressed, Takeuchi found the interview went really smooth. Many people wanted to assist or drive them around for free, and the hotel offered the group guest rooms for the lowest price.

“I have shared my feelings on Weibo that I like this city more day by day,” Takeuchi said, adding that during the shoot, he found many people they met were happy and the city is thriving.

One of the team members said she was impressed by the optimism of the people in Wuhan, and after she saw an old man swimming across the Yangtze River, she promised to introduce all the good things happening in the city to more people and recommend all of her friends visit Wuhan.

The Japanese documentary-maker has lived in Nanjing, capital of East China’s Jiangsu province, for the past seven years, and he’s made two documentaries about Nanjing’s anti-epidemic scene and how Nanjing is reviving after the virus outbreak. Both went viral in Japan.

“I saw some reports smearing or lying about China. I hope the media and people from other countries see China’s efforts in preventing the epidemic from an objective perspective,” Takeuchi said. “And if everything is okay, I hope I can visit Wuhan once again, to meet our fans there.”