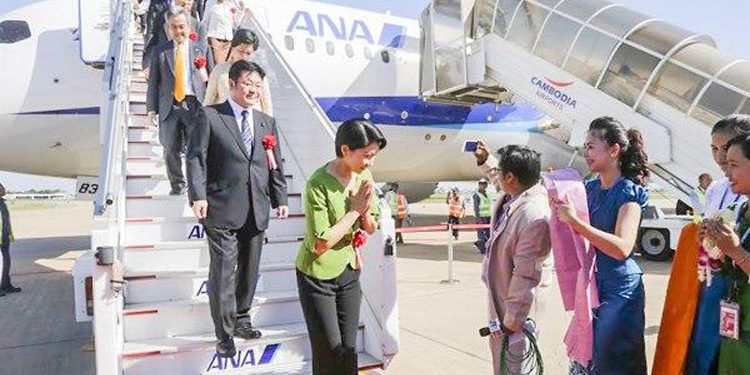 Japan is planning to resume business flights with 10 more Asian countries, including Cambodia. The destinations are where the pandemic is under control and what are known as travel bubbles or air bridges that proliferate in Asia. The Japanese news agency Nikkei Asian Review reports that Japan intends to begin talks in mid-July on resuming business flights with 10 more Asian economies including mainland China, South Korea and Taiwan, a move that will be backed by a sharp increase in Coronavirus testing capacity.

The State Secretariat of the Civil Aviation’s (SSCA) spokesman, Sin Chansereyvutha, said under the current plan, the reconnection between Cambodia and Japan may be delayed until the end of July and the resumption of flights depends on controlling the pandemic.

“So they need to monitor the booking system for those who want to fly to Cambodia because for now it would be difficult for the company to make the decision to reopen,” he said, adding that currently Cambodia retains a little flight connection with China and South Korea.

“We are making flight connections as normal, so reopening flights with other countries will show a gradual recovery of the aviation sector but it does not mean that it is better because everything is still uncertain,” he said.

Chhay Sivlin, president of the Cambodia Association of Travel Agents welcomed the news, saying that any reopening of flights between Cambodia and countries in the region is a good sign for the tourism and aviation sector because the crisis has already gone on for several months.

“There should be a time for international flights to resume because the tourism sector has suffered and thousands of staff are now unemployed,” she said. “We will at least benefit from having flight services, transportation and food [for businesses]… even though we aren’t widely open for tourists.”

Sivlin said that even though any resumption may first be aimed at business travellers, investors and diplomats, it is a positive sign for the aviation sector’s recovery.

She still insists the government will ease travel restrictions for foreign tourists in order to gradually receive more international visitors.

“So gradually I believe that the government will ease travelling restriction for tourists because closing the tourism visa has caused us a huge loss,” she said.

Tokyo’s plans for reopening travel target economies that hold deep ties with Japan and have controlled the spread of the Novel Coronavirus. Taiwan is expected to be among the first to agree to the arrangement.

The Cambodia Minister of Tourism said during a festival in the Japanese capital, Tokyo, in mid-2019 that the Kingdom aims to attract more than 300,000 Japanese tourists a year by 2020.