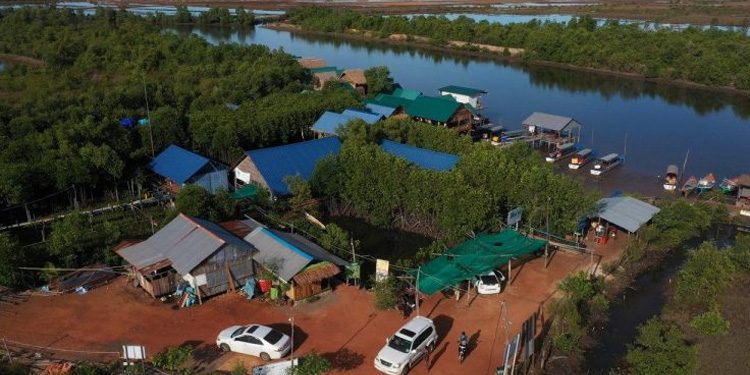 To promote domestic tourism, three communities in Kampot and a local tour company inked a memorandum of understanding (MoU) to attract vacationers to experience the pleasures of their province with a specially designed package.

Kampot provincial tourism department director Soy Sinol told Khmer Times that the MoU will give impetus to domestic travellers to visit Kampot province. He added the current arrangement of local tour packages for Cambodians does not appear to be popular compared with those for international visitors, but this MoU will spread awareness among people to consider and use  local tour packages and attract more travel and tour companies to participate to help boost the area as a tourism destination.

“It is to attract more tourists to visit Kampot. It is important for local communities to get experience in welcoming tourists. It is driving a strong internal tourist movement to push the internal economy,” he added.

He said that Kampot has four main tourism destinations to attract tourists. Among them:  the countryside experiences to the east of Kampot town with its salt and pepper farms, temples, the Sarus crane bird areas, Kampong Trach cave;  Kampot heritage with its museum, old town town, and night market and food street; river life, where visitors can see the lives of people along the Prek Toek Chhou river via boat; Bokor National Park.

Kampot has 21 hotels and around 300 guesthouses and bungalows with 4,000 rooms, with more than 200 restaurants and other services.

“Kampot provincial tourism department will work with the private sector to select more tourism communities to be part of the tour package because it is potential to attract more tourists,” Sinol added.

Om Pharin said that the collaboration will contribute to the development of the three communities and will improve incomes and livelihoods in the area. “We will continue to develop new and more unique tour packages to increase the number of tourists coming to these areas,” he said. It is not only a tourist destination but also has high potential for real estate investment. In fact, Forest Harmony developers are developing 90 villas – some costing millions of dollars – on 13 hectares.

He said the Forest Harmony project has beautiful mountain and forest scenery, which attracts both locals and people from Asia and Europe to visit and visit regularly.

Sinol added that the tour package is based on the location, numbers, accommodation and food, but it ranges from an average $39 to $100 per person per trip. He said the company only operates at the weekend. So far it has attracted 80 to 100 people per week to visit Kampot. “It is a good start and we should encourage it,” Sinol said.