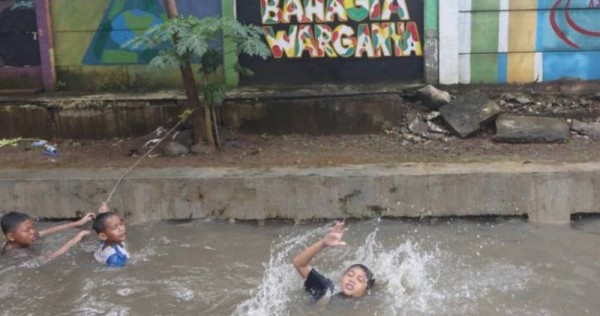 JAKARTA – The Jakarta administration will prepare a special tent for displaced Covid-19 patients who are affected by floods, Jakarta Governor Anies Baswedan said on Wednesday (Nov 4).

The tent will consist of several booths, which can be used by patients or other displaced residents who are undergoing self-isolation.

“We will prepare special tents in the flood shelters, as well as the transportation (for the Covid-19 patients),” Mr Anies was quoted as saying by Kompas.com.

Moreover, the Jakarta administration will also provide a special boat to carry Covid-19 patients as well as asymptomatic patients. This boat will be marked to separate it from boats for healthy residents.

“We are calling on regional governments to be vigilant to minimise the risk of Covid-19 transmission. One potential source of Covid-19 clusters would be the flood victims’ shelters,” he said.

Adherence to health protocols at the shelters, including wearing masks, physical distancing and washing hands, can reduce the risk of transmission, he said.

He also noted the importance of maintaining the cleanliness of the shelters and providing sufficient air circulation and sunlight to protect the people from common rainy season illnesses.

Mr Anies explained that the La Nina phenomenon is most likely to occur in Indonesia this year.

This phenomenon is forecast to cause weather anomalies, such as a spike in rainfall intensity across the nation, including in Jakarta.

Previously, the Meteorology, Climatology and Geophysics Agency (BMKG) warned that the current La Nina weather phenomenon could increase accumulated precipitation in Indonesia by up to 40 per cent, with heavy rainfall expected in several regions across the archipelago.

Mr Anies revealed that Jakarta’s drainage capacity is only able to cope with 100mm of rainfall intensity per day, which means he predicted that there would be no flooding if the intensity of rainfall was below 100mm.

However, if it amounts to more 100mm, he expects the flooding to subside within six hours.

“It’s our responsibility to combine our efforts so that the flooding will subside in less than six hours,” Mr Anies said.

Intensive precipitation, he went on to say, could lead to flooding. Heavy rainfall in the mountain area could lead to inundations in coastal areas, including Jakarta.

“We have time to prepare since it takes nine to 10 hours for the water in Katulampa Dam to arrive in Jakarta. It will take three hours until it reaches Depok, and six hours from Depok to Manggarai,” he said.