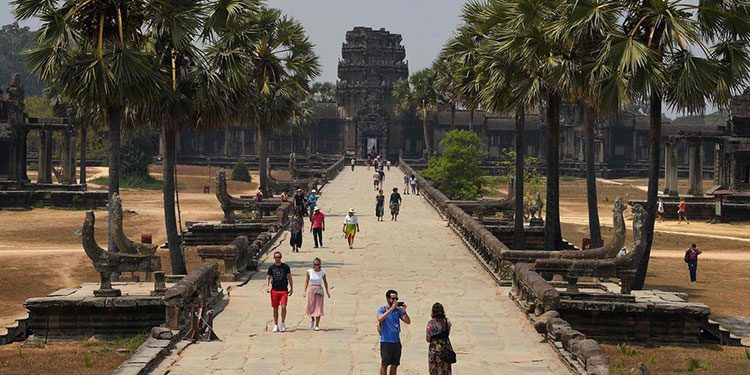 Cambodia predicted that international visitors to its famed Angkor Archeological Park will start to rebound gradually from next year if COVID-19 vaccines are available, a spokesman for the Ministry of Tourism said on Monday.

Angkor Archeological Park, the kingdom’s top tourist destination, has seen a huge slump in foreign tourists during the first nine months of 2020 due to the pandemic that has forced the country to impose entry restrictions for all foreign travelers since March.

Located in northwest Siem Reap province, the world heritage site received 396,241 international visitors during the January-September period of this year, down 76 percent over the same period last year, according to an Angkor Enterprise’s report.

The ancient site got 18.45 million U.S. dollars in revenue from ticket sales during the first nine months of the year, also down 75 percent year-on-year, the report said.

In September alone, the site received 2,948 foreigners earning 124,296 dollars from ticket sales, down 97.3 percent and 97.4 percent, respectively compared to the same month last year, it said.

Ministry of Tourism’s secretary of state and spokesman Top Sopheak said prior to the COVID-19, the site attracted around 9,000 foreign tourists a day, but currently, it receives about 70 a day and those are foreigners living and working in Cambodia.

He said during the pandemic, domestic tourists are the main source of visitors to the site.

“We expect that the number of international visitors to the Angkor Archeological Park will start to rebound gradually in the first quarter of 2021 if COVID-19 vaccines are available,” he told Xinhua.

The spokesman predicted that China will remain the largest source of tourists to the Southeast Asian nation during the post-COVID-19 era.

“China is a huge source market not only for Cambodia’s tourism, but also for the region’s,” he said. “We believe that more Chinese will visit Cambodia after the COVID-19 because of our close relationship.” Xinhua