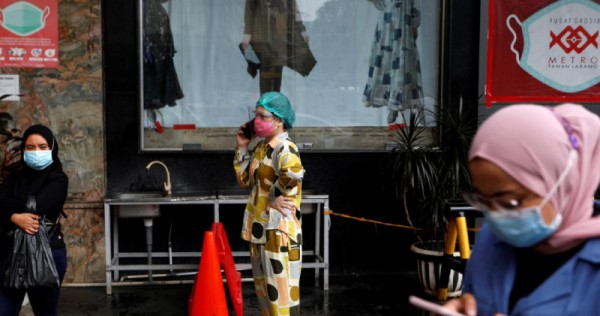 Indonesia’s confirmed Covid-19 case number has exceeded 500,000 as the country continues to endure the strain of the coronavirus pandemic, nearly nine months since it reported the first infections in March.

Jakarta remains the national epicenter with a total of 128,173 coronavirus cases reported – the largest concentration of Covid-19 patients in the archipelagic nation.

The capital recorded the highest single-day surge in Covid-19 infections with 1,579 cases on Sunday, prompting the city administration to extend once again the so-called transitional large-scale social restrictions (PSBB), which will remain in place until at least Dec 6.

As of Monday afternoon, Indonesia has also logged more than 16,000 deaths. East Java reported the largest number of fatalities in the country with 4,184.

A number of regions across the archipelago, including Jakarta, have gradually relaxed mobility restrictions in recent weeks as the central government and regional administration were keen to rejuvenate the national economy in light of the country’s first recession since the 1998 Asian financial crisis.

Many have raised concerns over lackluster enforcement of health protocols as the country still saw a number of mass gatherings across several provinces despite regional leaders’ stated commitment to curbing coronavirus transmission.

Between Nov 10 and 14, more than 10,000 people gathered in and near Jakarta to celebrate the return of controversial Islam Defenders Front (FPI) leader Rizieq Shihab to Indonesia, with crowds seen casually neglecting physical distancing measures.

On Saturday, the Limapuluh Kota Police in West Sumatra disbanded a wedding ceremony held for the child of local Disaster Mitigation Agency (BPBD) head Joni Amir amid fears of a new Covid-19 infection cluster, noting that the event had attracted at least 2,000 guests.

The Elections Supervisory Agency (Bawaslu) has recorded 398 health protocol violations at in-person campaigns between Nov 5 and Nov. 15, making for a total of 1,448 violations since the beginning of the campaign season ahead of December’s simultaneous regional elections.

The violations, which included failure to wear masks and gatherings of more than 50 people, defied a General Elections Commission (KPU) regulation that seeks to prevent the spread of Covid-19.

Masdalina Pane of the Indonesian Epidemiologists Association (PAEI) has urged the central government to set a good example for the public nationwide by postponing or calling off events considered to be detrimental to public health and safety, such as political campaigning ahead of the Dec 9 elections in 270 regions outside Jakarta.

Covid-19 hospitals in Bandung, West Java, are reportedly running out of beds with at least 88.6 percent of bed capacity already occupied – a massive spike from two months ago, when the occupancy rate stood at 32.5 per cent.

As of Nov 11, at least 282 healthcare workers nationwide have died of Covid-19 since the start of the outbreak in Indonesia, according to data from the Indonesian Medical Association (IDI).

Tri Yunis Miko Wahyono, an epidemiologist from the University of Indonesia, said he had not expected to see Indonesia’s case count pass the 500,000 mark before December.

He urged leaders of regions in high-risk zones across the country to reinstate and enforce full-scale PSBB to stem the spread of coronavirus to other parts of the archipelago.

“Regions in red and orange zones, such as Jakarta, should reinstate strict Covid-19 policies instead of relaxing the available health protocols,” Tri told The Jakarta Post on Monday, “Do not ease the PSBB until after those regions turn yellow or green.”

He went on to say that the government should continue communicating the urgency of the situation to the public as proven Covid-19 vaccines were unlikely to be available to the entire Indonesian population before the end of 2021.

“Don’t get complacent. Otherwise, the threat will become even bigger,” Tri said.