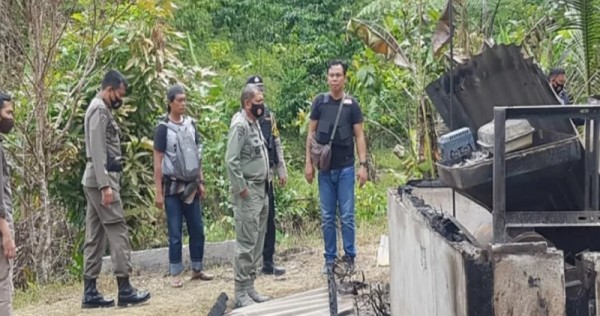 Indonesian security forces on Monday warned of further militant attacks, as they hunted for the remnants of a pro-Islamic State (Isis ) group that killed four Christians in Central Sulawesi over the weekend, including one victim who was beheaded in an effort by the group to “sow terror” in society.

The grisly deaths of the Salvation Army members in the western Sigi regency was carried out on Saturday by the East Indonesia Mujahideen (MIT), a terrorist group based in the mountains of the neighbouring Poso regency.

MIT leader Ali Kalora decapitated one of the victims as an act of vengeance against the recent slaying of two of their militants, said Brigadier-General Farid Makhruf, commander of a military force that covered Central Sulawesi.

“The victim, Yasa, was beheaded in a killing that was witnessed by his wife who managed to escape,” said Farid, adding that the man’s head was found 10 metres (32 feet) from his body.

The MIT was known to carry out attacks at the end of the year, Farid said. “If we don’t hunt them down and stop them, this is going to cause fear among people.”

In December 2018, the group beheaded a villager in Parigi Moutong regency, Central Sulawesi, and placed it on a bridge.

“I note that this is a killing with the most number of victims in one attack. Prior to this, MIT usually attacked one or two people only,” Adhe said.

Adhe said it was not the first time MIT had come down from their base in the mountains of Poso to kill civilians. They had previously targeted not just Christians and Hindus, but also Muslims they suspected of being “informants”.

Poso has been a jihadist zone for both local and foreign extremists wanting to wage jihad and undergo para-military training.

According to an Indonesian police source, many locals have tried to “make their way to Poso” but were arrested.

“I don’t have the exact figure, but we have arrested quite a number of them,” the police source said on condition of anonymity.

The MIT’s four victims were farmers from an impoverished area in Sigi with just 10 wooden houses, of which six were burned down. Among the structures destroyed was a wooden outpost used for praying.

While local media had speculated the attack was religiously motivated, it was more likely that the militants had wanted to “sow terror in society”, Farid said.

“No church was burnt, as reported by some local press. This killing was not targeted at Christians,” he said. “The victims were very unfortunate. The militants were likely to be looking for food and stumbled upon the villagers, and because it is very remote, it made them easy targets.”

Farid’s comments were echoed by the Indonesian Council of Churches, which said the killings were targeted at “everyone” in society.

“It is not only Christians in Sigi who are afraid. This terror attack has disrupted the lives of all people in society,” said Pastor Gomar Gultom, head of the council. “As such, I ask for the public and the press not to narrow this down to a religious problem, what more to call this a persecution of Christians.”

Over the weekend, the Salvation Army confirmed the victims were members of the organisation.

In a statement posted on its website, it said it was announcing “with great sadness” that an attack upon the Lewono Lembantongoa Outpost had “claimed the lives of four members”. It asked its followers to pray for the victims.

The MIT was the first Indonesian militant group to pledge allegiance to Isis under its former leader Santoso, who was killed by security forces in 2016.

Earlier this month, two of the group’s members were shot dead in Operation Tinombala, a joint military and police strike that was first ordered by President Joko Widodo four years ago. The operation has since been extended several times.

The group is estimated to have 11 members, including current leader Ali. Despite a massive manhunt for the militants, they have managed to evade arrest.

Farid said Ali was a former logger with few combat skills. “His only advantage is that he knows the jungles well and hides in it.”

The MIT was suspected to have the support of some local villagers sympathetic to their cause.

“There are some segments of society who believe in their ideology, give them food and feed them with information on where the police and military are operating,” he said.

Analyst Adhe from PAKAR said the Covid-19 pandemic was making travel to Poso difficult for militants. Additionally, the current “jihad zone of choice” was southern Philippines , he said.

According to a report by the Institute for Policy Analysis of Conflict (IPAC) released in April, the MIT was “hugely symbolic to the violent extremist movement”, and had moved from committing communal violence to spreading locally-inspired terrorism.

Its base was the only place in Indonesia where “extremists could ever plausibly claim to control territory, even if only a jungle camp or two, and maintain an active jihad”, the IPAC said.

In 2015, six Uygurs travelled to Poso regency for paramilitary training and became members of MIT. All were killed by Indonesian security forces around 2016.

The six took part in acts of terror around Poso, including the killing of two farmers in September 2015, local media reported.