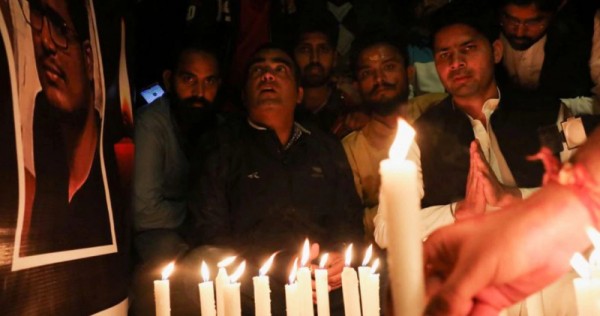 NEW DELHI – An Indian student was killed by shelling in the eastern Ukrainian city of Kharkiv on Tuesday (March 1), prompting New Delhi to step up demands for safe passage to evacuate thousands of its nationals trapped in the war zone.

Invading Russian forces are trying to lay siege to Kharkiv, firing volleys of artillery that have killed civilians including children, Ukrainian officials say.

Indian foreign ministry spokesman Arindam Bagchi said the ambassadors of Russia and Ukraine had been called in “to reiterate our demand for urgent safe passage for Indian nationals who are still in Kharkiv and cities in other conflict zones.”

In a post on Twitter, he added that the ministry was in touch with the family of the student, who he did not name.

In total, about 470,000 foreign nationals are stranded in Ukraine, including students and migrant workers, the UN migration agency said, urging neighbouring countries to grant them refuge if they try to flee.

An ally of Russia, India has not condemned Moscow’s invasion of Ukraine, instead calling for both sides to cease violence.

Russia says its assault from the north, east and south of Ukraine is not aimed at occupying territory, calling it a special operation to demilitarise and “denazify” the country – a justification dismissed by Kyiv and the West as war propaganda.

Kremlin spokesperson Dmitry Peskov on Tuesday dismissed allegations of Russian strikes on civilian targets and said reports of the use of cluster and vacuum bombs were fake. He categorically denied that Russia had committed war crimes.

Before the conflict began, Indians made up around a quarter of the 76,000 foreign students in Ukraine, by far the largest number, according to Ukrainian government data.

The Indian government has asked Indian pharmaceutical companies with operations in Ukraine and neighbouring countries to help the students with food, shelter and logistics, including facilitating their movement to border areas, the source added.

The government has sent four ministers to neighbouring countries to assist in the rescue efforts.

The situation in Kharkiv is of particular concern, a second government source told Reuters. An Indian team has been positioned in Belgorod, a Russian city about 70 kilometres (45 miles) away close to the Ukrainian border, but has been unable to evacuate citizens because of the fighting, the source said.

In unaffordable Seoul, housing is at the centre of the South Korea election