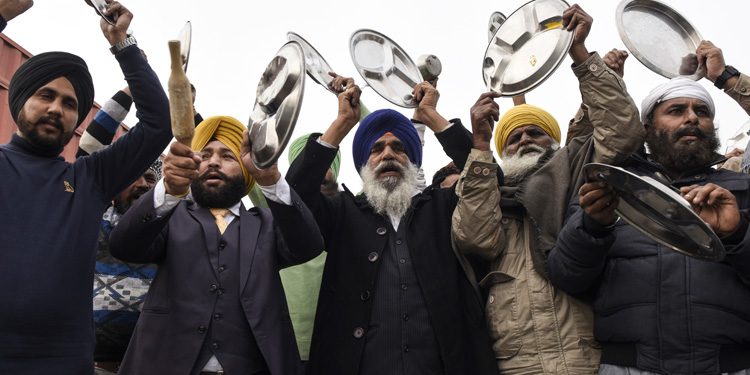 0
SHARES
13
VIEWS
Share on FacebookShare on Twitter
AFP – Indian Prime Minister Narendra Modi offered to hold fresh talks to end a stalemate over new agricultural reforms, in his latest push to win over farmers protesting for almost a month against the move.

Tens of thousands of farmers have been camping out near several entry points to New Delhi since Nov 26 against three new laws they say will lead to dismantling of regulated markets.

They also fear the government would stop buying wheat and rice at guaranteed prices, leaving them at the mercy of big corporates.

In a speech beamed live to millions of farmers across the country on Friday, Modi sought to allay their misgivings, insisting the laws, passed in September, would give them the freedom to sell their produce “anywhere and to anyone they like”.

“Lies are being spread that the local mandis [markets] will shut down, the minimum support price will be stopped… don’t be misguided by those having political motives,” Modi, 70 said.

“I am saying this with humility that we are ready to discuss every issue of the farmers, even with those [political parties– who are against us, for the sake of our farmers.”

Under the direct cash transfer scheme, small farmers get about $82 in four instalments in a year.

Modi also interacted with seven farmers from different states via a video conference in which they praised the government’s various farm schemes.

Agriculture employs about 70 percent of India’s 1.3 billion people and accounts for 15 percent of its $2.7 trillion economy.

But in recent decades farm incomes have stagnated, and experts say the sector badly needs investment and modernisation.

Farmer unions have demanded a total repeal of the laws and warned of a bigger agitation if their demands are not met.

Several rounds of talks between ministers and farmer leaders have failed to produce a breakthrough so far.

This article was first published in Khmer Times. All contents and images are copyright to their respective owners and sources.
Tags: #Narendra ModiIndian PMIndian PM Modi
Previous Post

Tax cuts and Tax exemptions in Cambodia will be extended