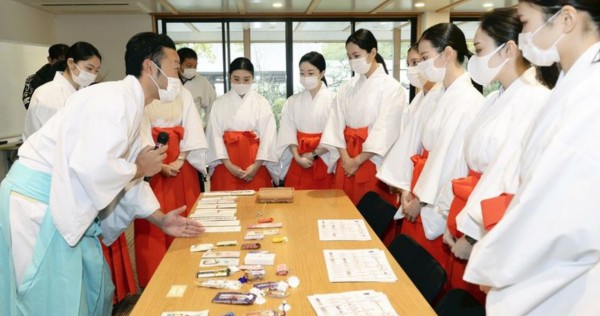 FUKUOKA, Japan – The Japan Airlines Group and the city of Munakata, Fukuoka Prefecture, have been working together on a joint project to use redundant personnel idled by the reduction of flights to contribute to society and revitalise local communities. It is an attempt to take advantage of the skills of airline personnel and the speed and creativity of the private sector to solve various regional problems.

According to Japan Airlines Co.’s Fukuoka Airport branch, the novel coronavirus outbreak has led to a reduction of JAL’s domestic flights at the airport to about 30 per cent of the usual number and the number of international flights contracted from overseas airlines to zero. As a result, JAL Group employees at the airport have not had much work to do.

The Munakata municipal government, which signed a comprehensive partnership agreement with JAL three years ago, said they desired that JAL assist with solving some local problems. The city and JAL set up a joint study team in September.

A number of projects have been implemented under the initiative so far. For example, JAL employees have helped the city with weeding, leveling ground and planting flower seeds in the area around the Windmill Observatory, a tourist spot on the city’s Oshima island, along with sales at the airport of local agricultural and fishery products usually sold at the city’s Michi no Eki Munakata shop by holding a special sales event named Sora no Eki (Sky station).

From Jan 1 to 11 next year, 31 female JAL employees will be sent to the Munakata Taisha shrine to serve as miko, or shrine maidens. After hearing that the shrine was having difficulty securing miko, the airliner proposed dispatching staff with high customer service skills, including those who usually work as ground staff. The company signed a short-term transfer contract with the shrine, which required more shrine maidens than usual due to the virus crisis. The JAL Group will receive service fees from the shrine in return.

Training for the miko started on Dec 21 at the shrine, with 17 participants on the first day. Shinto priests and professional shrine maidens taught them unique styles of speaking and behaviour, as well as how to distinguish more than 100 kinds of amulets, charms and lucky items sold at the shrine.

“I find it both fun and worrying. I’ll do my best not to make any mistakes,” said a 24-year-old ground staff member for domestic flights.

“Experiences in other industries can further improve their customer service skills in addition to contributing to society,” said Kumiko Saito, a manager of the JAL’s Fukuoka Airport branch.

JAL and the city will also discuss other possibilities for collaboration, such as supporting areas where shopping is inconvenient, accompanying elderly people on outings and trips, planning virtual overseas trips for junior high school students and offering foreign language classes to help recover the number of foreign tourists in the future.

Best of 2020: Top viral sports videos of the year, from a tai chi master knock out to a glass-smashing celebration