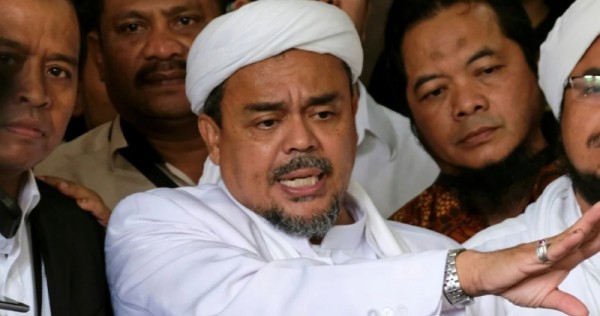 Fans of a controversial Indonesian hardline cleric have made videos that changed a verse in the Muslim call to prayer to a call for jihad, heightening fears that rising religious fundamentalism could snowball into conflict in the world’s most populous Muslim-majority nation.

This Week in Asia has seen at least four versions of these videos being shared on social media platforms such as Twitter and Facebook, as well as the WhatsApp messaging app. Each video shows a group of men in Muslim attire, standing in rows, listening to a man singing the call to prayer.

A verse of the chant, which originally means “hurry to the prayer”, has been changed to “hayya alal jihad”, or “rise up for jihad”, which the men responded to by shouting, “God is Great”, and raising their fists in the air. In one video, five men were shown wielding swords.

Details of where and why these videos were created are unknown, but on Twitter, the video could be traced back to Nov 29, posted by a supporter of Habib Rizieq Shihab, the leader of Indonesia’s biggest anti-vice organisation Islamic Defenders Front (FPI).

The video was shared with the caption: “Calls to jihad will be heard from mosques, Islamic boarding schools, and other Muslim communities if Rizieq Shihab continues to be criminalised.”

At the time of writing, Rizieq had not appeared for the police questioning. Before the summoning, authorities only imposed a fine of about US$3,500 (S$4,680) to Rizieq, drawing public anger from citizens who viewed the move as being too lenient towards the controversial cleric.

President Joko Widodo later told his cabinet to take a tough approach to all violators of coronavirus rules, no matter their positions.

The videos calling for jihad have led to a backlash by the country’s Muslim organisations, which see them as a threat against the country’s unity and religious tolerance.

Cholil Nafis, chairman of Indonesian Ulema Council, said that he hoped Indonesian Muslims would not be provoked by the “unnecessary” calls for jihad.

“I hope people do not alter the standard Islamic call to prayer. Jihad does not only mean physical war, but jihad can also mean the

“They are feeling under pressure after authorities act firmly against FPI and Rizieq Shihab, so they respond to it by posting [provoking] content such as these calls-to-prayer videos,” said the Indonesia analyst.

Arifianto added that many extremist groups used social media to spread the notion that they were being treated unfairly by authorities and to gain sympathy from their followers.

“If these [online provocations] cannot be controlled, they could snowball into real-life conflicts,” he said. “The government needs to calm these right-wing religious groups by facilitating a dialogue between them and moderate Islam groups such as the Ulema council, Nahdlatul Ulama, and [Indonesia’s second-largest Muslim group] Muhammadiyah.”

American study finds signs of coronavirus in US before China outbreak