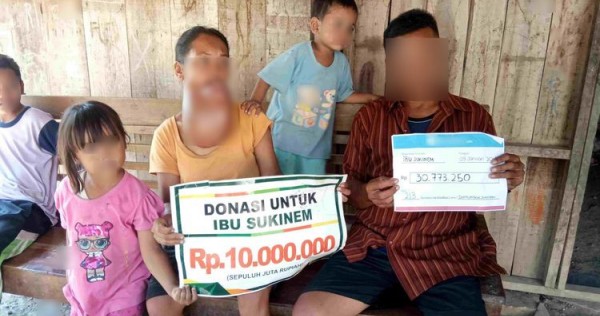 The husband of a cancer patient whose story went viral after he had claimed that the family had been visited by “fake” donors retracted his claims on Saturday, admitting that he had, in fact, received – and spent – Rp 50 million (S$4,733) in donations.

Nursam, the husband of cancer patient Kinem from Boyolali regency in Central Java, had said on Friday that his family had often been visited by donors who had asked to take photos but had never sent the promised money.

After the story went viral over the weekend, however, Nursam backtracked.

“Donors, volunteers, I apologize for my mistakes,” Nursam said on Saturday as quoted by kompas.com. “I spent all the money. There was about Rp 50 million. I spent it on daily needs and to buy two cows.”

Village officials took issue with Nursam’s initial story, saying local officials and residents had supported Kinem in many ways over the years.

Kinem’s jaw cancer began in 2009 when she discovered a big lump under her chin. The condition made it hard for the 45-year old to speak and eat, as her tongue was pushed forward. The cancer also knocked out her teeth.

He explained that the family had been given aid through the Indonesia Smart Card (KIP), the Indonesia Health Card (KIS), the Family Hope Program (PKH) and facilities from the Healthcare and Social Security Agency (BPJS).

“We discovered Kinem’s condition in 2009; she was pregnant at the time. We helped her through our limited capability by providing milk for the baby. Friends also raised funds for staple foods,” he said.