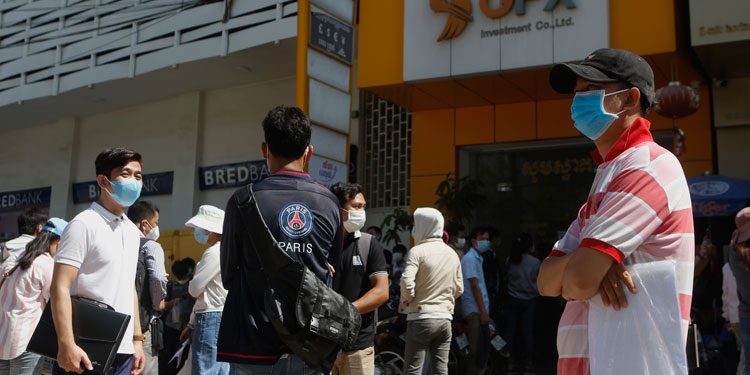 Investors were waiting with bated breath as they continued pouring into GoldFX Investment Co Ltd (GFX) offices in Toul Kork yesterday to seek a resolution to their two-month-long dispute with the derivatives brokerage.

A gathering on Monday did not yield any positive news after the company failed to deliver on a promise that a top executive would be made available to speak with victims.

A total of $27 million is believed to have gone missing from the GFX’s Canadia bank cash settlement account, leaving some 3,000 people in the dark wondering where their funds have gone.

“I think there is less than a 50 percent chance that I will get my money back because the process has taken such a long time,” a 29-year-old victim told Khmer Times after speaking to GFX on Monday.

“I asked the company why they returned the money to the self-trading accounts and they said it is because that money was still in Cambodia but the money from the copy trading account is somewhere else. They sent it to Singapore so it is difficult to claim the money back and they cannot promise when the money will be returned to clients,” he added.

The individual said that he had treated the investment vehicle like a bank account over six months so that he could gain a better return on his $5,000 savings than a bank account.

“I believe this company will close down forever and Cambodian people will not invest in another company whether or not they have a licence,” he said.

“They are currently in the process of filing a complaint against the two Singaporean people who have our money and we are waiting to hear from the company as well to see what the decision from the court will be,” he added.

GFX had previously alleged that three foreign nationals were complicit in embezzling and absconding with the funds.

The firm has since dropped charges against one of the individuals because he claimed to have only provided “technical” support, according to the man.

“They will process the case in Cambodia first and take it there [Singapore] at a later stage,” the victim claimed to have been told.

Under Cambodian law, the victims do not have “locus standi” – legal capacity – to bring a case against the company’s foreign employees because the victims did not have any direct dealings with them, according to a legal expert speaking under the condition of anonymity.

None of the victims interviewed held the foreign nationals culpable for the missing funds and no one came forward to say that they join would GFX in its suit against the individuals.

“The victims must also prepare themselves for the eventuality that the company is insolvent, in which case they will be left holding the bag. Then, the victims and future plaintiffs may explore the possibility of acting against the executives or shareholders by moving the courts to pierce the corporate veil,” the lawyer said.

“Courts in Japan, whose system Cambodia closely follows, are empowered to hold the directors and/or shareholders directly responsible in case fraud or improper conduct is established. Factors such as gross mismanagement, gross negligence and dereliction of duty in case of directors and other senior administrators can also create personal liability for officers and/or shareholders,” he added.

Hundreds of victims appeared en masse on Monday morning at the only GFX branch left operating with their certificates and deposit slips in hand.

One investor shared documents indicating that he had invested $50,000 with the company. He said that the certificates were worth less than the folder that contained them.

“My account is in negative balance. Technically I owe them money now. How can they allow this to continue?” he asked.  “This is wrong. I don’t want to know when my money will be given back, I just want to be sure that it will be returned.”

Many victims said that they had been encouraged by family members or friends working in the company’s sales department to invest.

Khmer Times previously reported that victims claimed to have been encouraged by the derivatives brokerage company to solicit investors in exchange for commissions and promotions.

Promotions ranged from an Apple Watch to trips abroad, according to the old GFX website (goldfx.co), which still appears to be down.

A 30-year-old investor who lost about $5,000 by investing in GFX described a Ponzi scheme when explaining how he thought the business operated. A Ponzi scheme is like pyramid scam in that it encourages people with high returns but only uses new people’s money to afford the returns and does not involve any actual trading.

“I don’t think they had any plan to pay us back. They waited until there was enough money in the account before disappearing with it. They just took a little bit out here and there to repay people when the contracts ended to build up credibility,” he said.