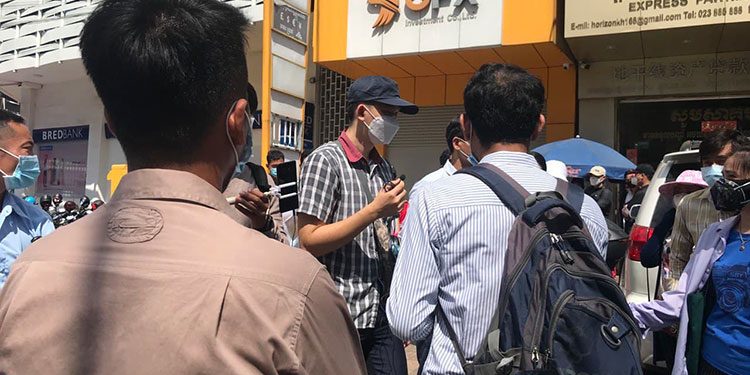 About 100 people appeared in front of Goldfx Investment Co Ltd (GFX) offices in Tuol Kork district yesterday as their standoff with the derivatives brokerage enters its seventh month.

The display was the first to take place after victims appealed directly to Prime Minister Hun Sen for assistance by demonstrating in front of his residence in Phnom Penh and Takhmao town.

Up to 30,000 accounts are believed to have been compromised in March, resulting in the loss of up to $27 million from traders’ accounts.

“There used to be thousands of us, but most people have accepted the offer because they lost hope or they needed the money because of Covid,” a victim, 38, who claimed to have lost $15,000 told Khmer Times under the condition of anonymity.

“There are probably about 400 of us left now. I won’t blame the employees, my agreement is with GFX, not them,” he continued.

High profile representatives have not stepped aside and have combined groups to represent the diminishing group of holdouts.

“Victims have found it difficult to wait any longer for a solution since they worked so hard to ask for help but were not offered a better solution. The pressure of the deadline forced many people to accept the 30 percent compensation package,” a newly appointed representative said.

GFX has postponed its deadline for investors to accept the retribution package four times. The most recent was on Oct 26.

“The company has remained silent and not provided any information since Sept 15. Our group’s intenion today is to give the company a letter that we have waited to negotiate for the last seven months but the company has not sat down with us at all. We want to follow the recommendation of Prime Minister Hun Sen and settle the matter outside of the court,” the representative continued.

Experts have previously gone on record to allege GFX was a Ponzi Scheme from its inception.

A high-profile businesses leader previously shared an email which alerted authorities last year that the company was “a scam” but the Securities and Exchange Regulators of Cambodia (SERC) allegedly did not respond to the complaint.

“GFX is a bit of a throwback to the scandals that plagued the banking and property sector in previous decades … almost every family has a story. What makes this story unique is the high-profile names and families connected to the company,” he said.

One victim said she had lied to her family and told them she had only lost about $500 when she had actually lost $15,000.

“My grandmother lost money in something like this back in 2001. When I told them about it, they begged me not to trust GFX but I didn’t listen because I saw that the people in charge of the company are very powerful, so I trusted them, to my folly” she said.