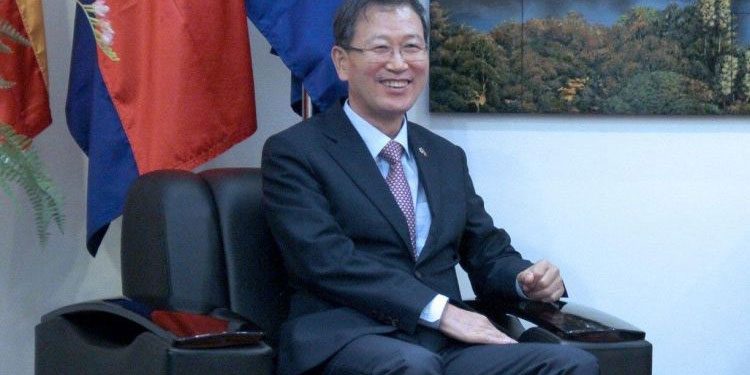 “Once the ongoing Cambodia-ROK FTA negotiations are successfully concluded, we can anticipate further increase in bilateral trade and investment, Mr Heung-kyeong said in his remarks on the occasion of the National Foundation Day of Korea, Oct. 6.

The remarks were made when the two countries started the third round of negotiations on bilateral free trade agreement, with a joint commitment to complete it before the end of this year.

Since the establishment of their diplomatic relations in 1997, bilateral trade volume has increased 19 times from $54 million to $1 billion and people-to-people exchanges have increased 280 times from 1,400 to 400,000, the Ambassador said.

Korea, as a mutually beneficial partner of Cambodia, has been active in promoting trade and investment as well as people-to-people and cultural exchange, he added.

In terms of accumulative investments in Cambodia, Korea ranks second overall, he continued, stressing that more than 200 Korean companies are actively conducting businesses in Cambodia’s major leading industries such as garment, agriculture, and finance.

In February this year, Mr Hun Sen had visited Seoul, Korea and had a fruitful meeting with Moon Jae-in, President of the Republic of Korea. Both leaders praised the rapid strengthening of bilateral relations and the remarkable achievements made through various fields of cooperation. Chea Vannak – AKP