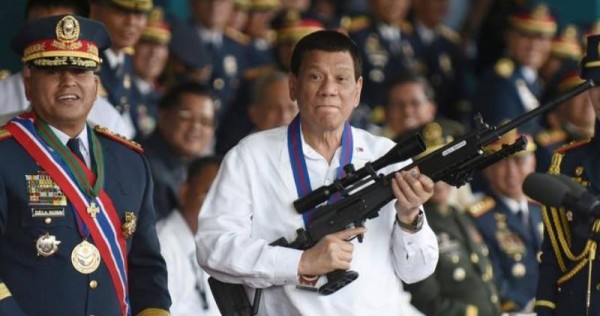 Philippine President Rodrigo Duterte’s six-year tenure has been marked by his US-China policy flip-flops and ambitious infrastructure plans, but it is his brutal war on drugs that will define his legacy when he steps down on Thursday (June 30), experts say.

After being the mayor of Davao City for 22 years, during which he earned the moniker of “The Punisher” for his unyielding stance on crime, Duterte ran for the top job in 2016, promising to cleanse the country of illegal drugs within six months.

He warned drug peddlers and addicts then: “I do not want to commit a crime but if by chance, God will place me there, watch out…the fish will grow fat in Manila Bay because I will throw you there.”

The strongman leader launched a crackdown that police data claims has killed some 8,000 suspected drug criminals, although the UN Human Rights Council noted some groups had estimates upwards of 30,000.

In the end, Duterte discarded his self-imposed deadline and as recently as June 17, methamphetamine hydrochloride or Ice continued to be sold in Davao.

Lucio Blanco Pitlo III, research fellow at the Asia Pacific Pathways to Progress think tank in Manila, cites Duterte’s “controversial drug war” as among “the three key things that stand out” in his legacy.

The other two are his Build, Build, Build infrastructure programme and his “independent” foreign policy, Pitlo said.

A long-time US defence ally, the Philippines under Duterte shifted to deepen relations with China amid a rivalry by both superpowers to ramp up their influence across Asia and the Pacific.

Duterte called for a review of the Philippines’ 1951 Mutual Defence Treaty with the US — “the alliance’s bedrock” — and threatened to cancel the Visiting Forces Agreement, only to make a U-turn later.

Pitlo viewed this as a move that “got stronger US commitment to its position in the West Philippine Sea”, referring to its maritime areas on the western side of the archipelago.

The South China Sea is the strategic waterway at the centre of a dispute between China — which lays claim to nearly the entire sea via a “nine-dash line” — and four Southeast Asian parties including the Philippines.

Even though an arbitral tribunal established under the UN Convention on the Law of the Sea ruled that the nine dash line “has no lawful effect”, China has continued to assert its claims in areas within the Philippines’ exclusive economic zone and on its continental shelf.

But in a bid to prevent ties with China from going south, “Duterte navigated a soft landing to soothe tensions,” Pitlo said.

“He downplayed the disputes — promising that he would raise the matter at a later time, which he did,” Pitlo said.

“He expanded economic ties with China, boosting trade, investments, tourism and infrastructure. The warm ties he fostered enabled the country to receive critical assistance from China, especially in the early months of the struggle against the Covid-19 pandemic.

“Beijing donated masks, PPEs, test kits, and sent medical experts to share valuable lessons and best practices in the fight against the coronavirus. China was also the first to donate and commercially supply vaccines to the Philippines,” Pitlo said.

But even as he put the ruling aside to grow Chinese investments in the Philippines, “Duterte made history by asserting the landmark 2016 arbitration in two consecutive UN General Assembly sessions — the 75th and 76th in 2020 and 2021, respectively”.

“He also invested in modernising the Philippine military and coastguard, and diversified the country’s arms suppliers and defence partners. He also made the most substantial infrastructure upgrade in Pag-Asa, seat of the Kalayaan town in the disputed West Philippine Sea, since the 1970s,” said Pitlo.

He added that under Duterte’s foreign policy, the US “eased restrictions on Philippine access to more lethal and sophisticated arms and defence platforms to support its junior ally’s military modernisation”.

One senior military official credited Duterte, in a separate interview, for contracting the purchase of two new Corvette warships from Hyundai Heavy Industries on Dec 28, 2021, and three Brahmos shore-based anti-ship missile systems from India on January 28.

Other recent acquisitions such as the Multi-Role Response Vessel, BRP Melchora Aquino — which Duterte commissioned on June 12 — was actually contracted by the late President Benigno Aquino III on Feb 7, 2020, with a Japanese loan.

“He conceded the West Philippine Sea to China,” he said.

“When Duterte says President Xi Jinping will protect him from being ousted as president against his own armed forces, he has made himself a vassal” of China, said Carpio, who has often spoken out on the maritime dispute in a personal capacity. “That’s not an independent foreign policy.”

Carpio noted that while Malaysia had continued oil drilling activities, and Indonesia carried on with its oil exploration within both their EEZs despite China’s protestations, Duterte stopped the private consortium Forum Energy from exploring for oil in the Reed Bank, an underwater feature well within the Philippine EEZ, because it would offend China.

Duterte is likely to go down in Philippine history as the president who deliberately set a policy to kill his own people in a manufactured drug war in order to get elected.

A 2015 survey made by the Dangerous Drugs Board found 1.7 million drug addicts in the country but 1.2 million of them smoked marijuana and 859,150 also used Ice.

Duterte arbitrarily quadrupled the number of Ice addicts to 3.7 million in 2016 to justify his drug war.

Duterte’s social media strategist Nic Gabunada noted that illegal drugs only became an issue in the election campaign when Duterte started railing about them.

Duterte has remained dismissive of the killings in the drug war being pinned on him, in complaints filed before the International Criminal Court since 2017 at The Hague.

On June 12, he reiterated: “We kill, that’s not a problem. But those we kill are criminals.”

Carpio, who was born in Davao City and studied in the same school as Duterte, has been highly critical of the extrajudicial killings: “They were just killed like flies”.

“If they did something wrong, they should have been arrested and put to trial, that’s very basic. You cannot deprive a person of life without due process of law,” said Carpio, who believed tens of thousands had died.

According to his niece and critic Nuelle Duterte, it was an “open secret” among residents that a vigilante group called the Davao Death Squad “took orders” from her mayor-uncle.

“That, to me, made him not qualified to be a president,” said Nuelle, who now works as a psychiatrist in New Zealand.

Nuelle believed her uncle was elected because the image of a strongman appealed to many people.

“Filipinos like to have that image of an action star, one who punches, even maybe kills, as their leader — that fantasy action hero, we really do like our fiction,” she said.

Former justice Carpio credited “the massive disinformation on social media” for making Filipinos believe that Duterte’s war on drugs was right and just.

“Under Duterte, digital disinformation and digital attacks became normalised and even institutionalised,” said Jonathan Corpus Ong, a researcher on disinformation at Harvard University.

“Duterte’s crass and aggressive naming and shaming of media outlets, human rights groups, and political rivals is his exceptional innovation. This has shrunk the space of a political centre in which citizens could meet and deliberate.

“Now citizens are expected to join one of two camps and it flattened out possibilities for dialogue or compromise,” said Ong, the author of Architects of Networked Disinformation.

“Though it’s simplistic to say that disinformation campaign or troll armies in themselves could win an election, politicians across the political spectrum and down to the local level bought into the hype of the power of social media campaigns. Now, digital campaigns have become central rather than peripheral to any politician’s arsenal,” Ong said in an interview on Thursday.

He credited Duterte, though, for vetoing “an overbroad ‘anti-fake-news law'” unlike Singapore or Thailand which now have similar laws “with vague and arbitrary definitions of fake news and disinformation, and weaponised by political elites to shut down criticism”.

As President-elect Ferdinand Marcos Jnr — himself an apologist for his dictator-father’s legacy — is set to take office, some rights activists worry about the impact of the Duterte administration’s brutality.

Carlos Conde, senior researcher at Human Rights Watch, Asia Division — who once lived in Duterte’s Davao for a decade while writing about his death squad for The New York Times — said if Duterte was not held accountable by the ICC over the drug war, “my fear is we will have a new generation of what I’d like to call ‘mini-Dutertes’ — local politicians who will use violence, disregard human rights and civil liberties, and then justify all of that by using common or existing problems such as street crime or drugs…to win elections”.

“Duterte has opened the floodgates for a type of governance that disregards the rule of law, due process and human rights,” he said. “He has demonstrated that doing that can be very politically expedient and beneficial to the politician.”