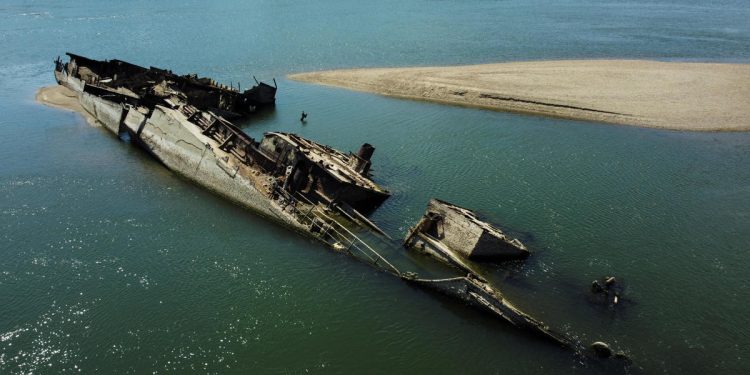 As Europe continues to experience a record heat wave that one top scientist said could signal its worst drought in 500 years, receding water levels along the continent’s massive Danube River have exposed around two dozen sunken ships that belonged to the German army during World War II, according to Reuters.

The Danube, which is Europe’s second-longest river, stretches from the Black Forest in southwestern Germany to the Black Sea in eastern Romania. Its water levels reached one of their lowest points in almost a century this year, and recently fell five feet in three weeks’ time at a stretch near Budapest, the Associated Press reported. The area’s leading water company warned that the sudden drop could threaten its supply of drinking water, according to the AP.

About 380 miles south of Hungary’s capital city, receding water along the Danube near Prahovo, Servia, revealed the hulks of more than 20 vessels once operated by Nazi Germany’s Black Sea fleet, which traveled through the waterway while retreating from Soviet forces toward the end of the war. Hundreds of sunken German warships are scattered across the Danube River, and they can pose dangers to current river traffic and shipping when water levels fall too low, according to Reuters.

Many of the sunken ships — including those that just resurfaced near Prahovo — still contain ammunition and explosives, the news agency reported, adding that some of the newly exposed hulks have narrowed usable stretches of the Danube by around 200 feet.

“The German flotilla has left behind a big ecological disaster that threatens us, people of Prahovo,” Velimir Trajilovic, 74, a  resident of the Serbian port city, told Reuters.

Persistent droughts across Europe and North America, which scientists attribute to ongoing climate change, have sparked a range of concerns about the health and safety of communities that rely on water sources that are now rapidly depleting. Receding water has also led to a number of discoveries. In Italy, an unexploded 1,000-pound bomb was found earlier this month as the country’s river Po runs dry. It surfaced about two months after a 50-foot barge, also from World War II, turned up elsewhere along the same river.

In the U.S., record-low water levels at Lake Mead, the nation’s largest reservoir, have led authorities to discover human remains — some of which are estimated to be decades old — on multiple occasions since early May. A sunken World War II-era boat was also found there in July.