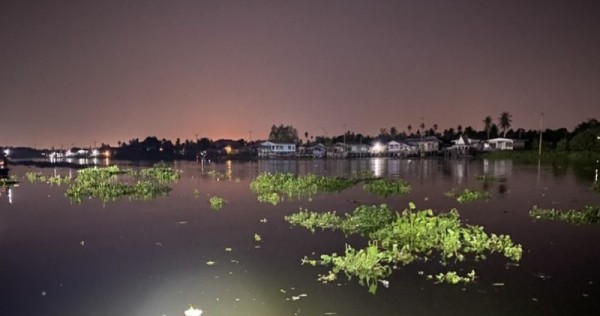 One passenger was missing after a long-tailed boat sunk in Chao Phraya River on Saturday (Jan 2) night, officers from Pakkred Police Station in Nonthaburi province said.

The incident occurred at the Tha-it Suksa School pier in Pakkred district. The driver and four other passengers survived.

Payom Pumpuang, a 44-year-old villager, said she decided to row a boat to help the four passengers as she heard their appeals for help in the middle of the river.

A police officer said the five passengers aboard the boat were disabled and were unable to talk.

“When the long-tailed boat arrived at the pier, it hit a stump or a log before sinking. The boat driver swam to the shore, but the passengers who could not swim struggled in the boat until the villagers came to save them,” police said.

Police said they had asked divers at Ruamkatanyu Foundation to search for one missing passenger, but they were not successful due to the strong tide.

Kwanchai Pintokaew, the 43-year-old driver of the long-tailed boat, said five disabled people had hired him to visit temples in Koh Kret Island, adding that he didn’t intend to escape from the scene.

“While the boat was sinking, I shouted for help to the villagers before swimming to the shore,” he said.