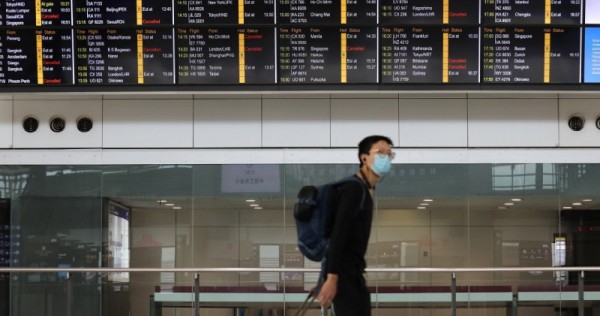 In scenes reminiscent of Tom Hanks film The Terminal, a passenger has been stranded in Hong Kong International Airport for at least three months, one of several caught up in the transit restrictions introduced during the coronavirus crisis.

Their plight emerged when 11 transit travellers, who arrived in the city from Dubai to catch a connecting flight to mainland China, were stuck in the airport for five days.

A further six people remain in limbo in the international transit hub.

They have all tested negative for the coronavirus, some relying on handouts from airlines and other sources of support, until their situation can be resolved.

Here is a rundown of their experiences, and how the authorities have responded.

Why are transit passengers stranded at Hong Kong International Airport?

As part of Hong Kong’s emergency response to the global health crisis, its airport transit services were suspended on March 25, only to resume on June 1. But the mainland has remained off-limits for transfers.

Despite that prohibition, some passengers have been mistakenly allowed to board their flights.

They include 11 Emirates customers who travelled from Dubai to Hong Kong with the intention of flying on to mainland China, and a mainlander arriving from the United Kingdom via British Airways to transfer home, who has been in the city’s transit zone for 15 days, as of Monday.

The passenger stranded the longest landed in Hong Kong in March. Flying in from Canada he had hoped to complete his journey to Vietnam. He remains in the confines of Hong Kong airport’s transit area.

According to Cathay Pacific, his connection to Vietnam was cancelled when the Southeast Asian country closed its border to international flights. Restrictions on transit flights at Hong Kong airport were not in effect at the time.

What happened to these passengers?

The Dubai arrivals touched down in Hong Kong on June 21.

But it took five days for the Airport Authority to inform health officials that the passengers had shared the flight with 26 people previously confirmed as infected, in a case highlighting communication issues between the organisations.

All of the marooned passengers have tested negative, as of Monday, although they are yet to pass the two-week incubation period for the virus.

The Post has learned that various government departments are still discussing where to send this group of passengers once the 14-day quarantine has been completed.

Since they do not hold a valid visa, they will most likely be sent back to Dubai or mainland China.

The incident has sparked public concern over the health risks posed by stranded passengers.

According to Cathay Pacific, the man hoping to fly to Vietnam is reluctant to leave the airport and wants to wait for the next available flight to his destination.

Cathay said it had notified the relevant authorities of the incident in March and had been trying to secure a flight for the passenger.

For the British Airways passenger, the airline said their repeated offer to fly her back to Britain was refused. The airline has been providing her with meals and bedding.

The authority said isolation facilities were now set up in the transit area so that such passengers would not come into contact with airport staff. The travellers would also undergo Covid-19 testing.

How have the authorities responded?

The Airport Authority, which is responsible for the travel hub’s operations, said it had clearly informed all airlines, before the resumption of transit services, that they must comply with the regulations.

Those rules require airlines to ensure – before boarding – that passengers transferring through Hong Kong will be accepted at their final destinations.

It is the airlines’ responsibility to avoid passengers being stranded, the authority said, adding that in the latest cases Emirates and British Airways had fallen foul of the relevant regulation.

The authority said they were taking the incidents very seriously and following up in conjunction with relevant government departments.

The Civil Aviation Department (CAD) has also written to Emirates requesting they provide its account of the incident.

The airline has pledged to introduce measures to prevent a repeat of the incidents, while British Airways is still investigating why their passenger wanting to return to mainland China was allowed to board.

Neither the authority nor CAD responded to questions on whether airlines would be penalised. However, an airport source confirmed they would be liable for fines.

The Immigration Department said only those with valid permits or visas could enter Hong Kong. It declined to comment on what kinds of permits those stranded passengers held.

The Post understands that health authorities take the lead in deciding whether to allow passengers to enter the city where health risks are involved.

The Centre for Health Protection said the 10 Emirates passengers might pose a health risk to others so they were sent into quarantine. The eleventh passenger decided to fly back to Dubai instead.

How are other places dealing with marooned passengers?

Since early March, many countries have closed their borders to flights carrying overseas passengers, or even their own citizens, to contain Covid-19’s spread. The move has caused a global phenomenon of stranded passengers.

In Singapore, nearly 100 travellers arriving from Philippines and Malaysia were stuck at Changi Airport in March after the city state’s government imposed travel restrictions on visitors coming from or through the Asean region.

Some travellers were unable to return to India due to the border closures there.

Singapore officials reportedly helped 97 passengers with food and hygiene facilities until Singapore Airlines agreed to fly the stranded passengers back to India.

Another widely reported case was a 23-year-old Ghanaian footballer stuck at Mumbai Airport in India for 74 days after his flights were cancelled and his visa expired.

Running out of money, Randy Juan Muller was said to have relied on the help of airport staff offering him food and daily necessities.

He was finally allowed to move into a local hotel earlier this month, and is waiting for airlines to resume flights.

Cambodia will adjust quarantine measures for investors and experts