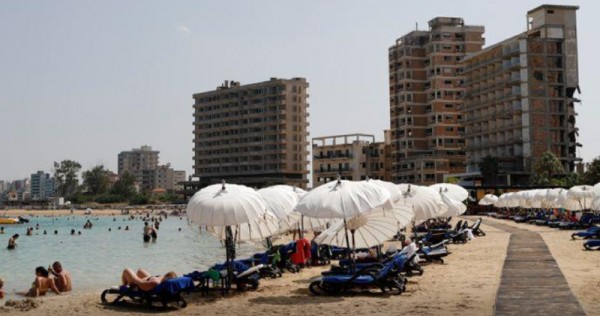 Authorities in Northern Cyprus said they would reopen the beach area of an abandoned resort in no-man’s land on Thursday, a move condemned by Greek Cypriots and likely to conjure up memories of the 1974 Turkish invasion that partitioned the island.

Ersin Tatar, premier of the breakaway state of Northern Cyprus, made the announcement in Ankara alongside Turkish President Recep Tayyip Erdogan, who said he backed the decision on Varosha, which in the 1960s was a playground of the rich and famous but has, for decades, been sealed off behind barbed wire.

The move could weigh on Turkey’s dispute with European Union members Cyprus and Greece over territorial rights in the Eastern Mediterranean. Tensions had eased after Ankara and Athens agreed to resume talks.

“God willing, we will start to use the Maras beach on Thursday morning together with our people,” Tatar said, using Varosha’s Turkish name. Northern Cyprus is only recognised as a state by Turkey.

“We hope that the whole of Maras is opened to use after ongoing work is completed by respecting property rights,” Erdogan said, pledging support for Turkish Cypriot officials.

Cyprus’ internationally recognised Greek Cypriot government harshly criticised the move, saying it ran contrary to international law. It said it would seek recourse to the United Nations Security Council and raise the issue with its EU partners.

Any change to the status of the fenced-off area will infuriate Greek Cypriots, 39,000 of whom lived in Varosha before fleeing advancing Turkish forces 46 years ago.

A southern suburb of Famagusta, Varosha has been empty since the invasion, which followed a brief Greek-inspired coup and divided the island into Turkish and Greek Cypriot sides.

Before 1974, the suburb had been Cyprus’ top resort, drawing some of Europe’s most well-heeled tourists, among them film stars Elizabeth Taylor, Raquel Welch and Brigitte Bardot. Many storied hotels stood along JFK Avenue, including the King George, The Asterias, The Grecian, The Florida and, reputedly Taylor’s favourite, The Argo.

Tatar had signalled steps to reopen Varosha in August, saying a revival of the area, in which churches and residences are slowly crumbling alongside the hotels, would bring trade and tourism benefits.

Presidential elections are expected to be held in Northern Cyprus on Sunday, with Tatar a candidate.

Varosha has been off limits along ceasefire lines to all but the Turkish military since 1974 and has stood as a bargaining chip in the decades-long dispute between Greek and Turkish Cypriots.

Several peacemaking efforts have made no significant progress and the discovery of offshore energy resources has complicated efforts to resolve the island’s partition.