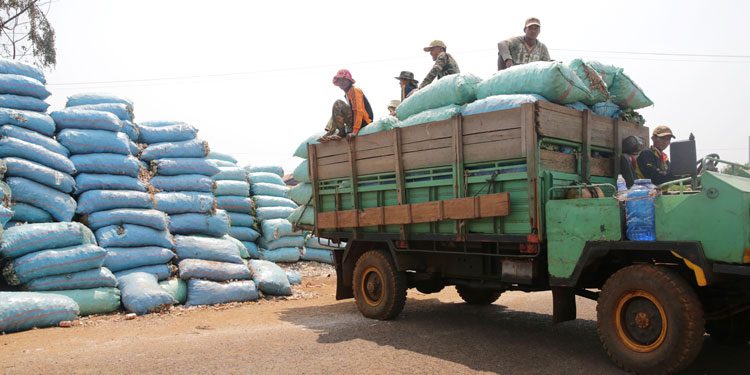 COVID-19 is continuing to keep the Kratie province-based cassava processing plant on hold after months of delays, according to the Minister of Agriculture, Forestry and Fisheries (MAFF).

Agriculture Minister Veng Sakhon said that at present nothing is progressing, with all work towards completion stalled by COVID-19.

“The factory is almost completed but the company cannot proceed with the installation of its machinery until the experts needed to manage technical issues are in-country and on-site,” he said.

Sakhon noted that once in operation, the plant will benefit from both a low cost of electricity and reduced export transportation costs because of its proximity to the Vietnamese border.

The plant, an investment by Hong Kong-based Green Leader Holdings Group Co Ltd, has been put on hold since mid-2019. The company is set to invest a total of $150 million in the project, which broke ground in 2018.  Sakhon told Khmer Times in June that the delay was because of the high cost of production.

It is set on 20 hectares of land in Snuol district.  Once in operation it will be the largest such facility in Cambodia, able to process some 600,000 tonnes of fresh cassava roots yearly as well as an annual production capacity of 150,000 tonnes of modified starch.

Sakhon said the sector faces additional challenges because of climate change, a lack of disease-resistant varieties and loss in soil quality resulting from traditional farming methods.

Yan Thach, a farmer in Kampong Thom province’s Sandan district, who cultivates five hectares of cassava, said her cassava did not grow well this year because of heavy rains. She said that, with good weather, she could normally harvest 100 tonnes of fresh cassava per year.

“I don’t know any information about the cassava processing plant and cassava policy. I just grow and sell it to the broker in my region,” Thach said.  She remarked that most of her colleagues in the village have turned to growing cashews because they are told it is more profitable than cassava. “I won’t give up on cassava but will start growing cashews in addition,” she said, adding that this year she could sell dry cassava at 360 riels per kilo up from 350 riels per kilo in 2019.

In August the government approved the “Draft Law on Cassava National Policy 2020-2025”, which designates the modernisation of agriculture as one of its most important priorities, particularly in transforming family-owned cultivation to managed agro-commercial production.

According to the government report, the rapid growth of cassava cultivation areas in recent decades has made it the second-most important crop in the Kingdom after rice production.

The report shows that cassava accounts for between 3 and 4 percent of national gross domestic product. Each year, about $300 million is invested in cultivating cassava across 600,000 hectares. Fresh and dried cassava slices cultivated in Cambodia account for $728 million in exports. Cassava cultivation engages more than 90,000 rural families in 13 provinces.

Cambodia exported 3.29 million tonnes of cassava in 2019, an increase of 27 percent from 2018’s 2.59 million tonnes, according to the ministry of agriculture’s report.

Cassava is a long, tuberous, starchy root that is an essential ingredient in many cuisines. It is eaten mashed, added to stews and used to make bread and chips. Cassava, also known as yuca, must be cooked or pressed before it’s eaten because it is poisonous in its raw form.

Thai police hunt for woman who abandoned newborn on road