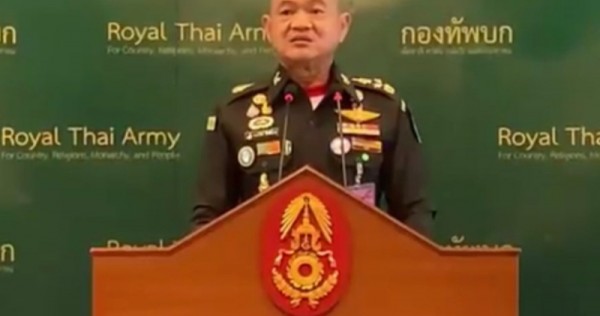 Asked on Monday if there was any solution to the current political unrest, he said he reminded himself frequently that political conflicts must be solved by political means.

“If everyone is sensible and considers the issue from all angles, then we will know what to do,” he said.

When reporters pointed out that some people were urging the military to stage a coup, he responded that the possibility of a coup was less than zero.

Commentators point out that similar vows were made by Prayut Chan-o-cha just months before the then-Army chief staged a coup in 2014 and became prime minister.

Talk of an impending coup is growing louder online, as the government shows no sign of heeding protesters’ demands.

Arnon Nampa, a prominent human rights lawyer and key protest leader, has warned a coup would lead to disaster.

He also predicted the military would not stage a coup, since that would mean scrapping the current Constitution and opening the door for another party to declare a more democratic charter.

Arnon’s statement echoed the protest movement’s stance that any coup would be met with fierce defiance.

“The solution must be via a compromise, as HM the King said, but when or how it will happen

The government has proposed setting up a national reconciliation committee to resolve the problems, but the opposition and protesters view the move as a delaying tactic. Meanwhile the government continues to crack down on peaceful pro-democracy protesters.

Gothom Arya, adviser to the Institute of Human Rights and Peace Studies at Mahidol University, said he supported moves to launch a national reconciliation panel because it could lead to a peaceful solution.

Pro-democracy demonstrators began protesting in February, pausing during the Covid-19 lockdown before returning to the streets in July. They are demanding Prayut’s resign, a new Constitution and reform of the monarchy.

The rallies have triggered smaller counter-protests by yellow-clad royalists. Some observers speculate the establishment may be using the yellow-shirt movement as a tool to stoke tensions in order to justify a coup.