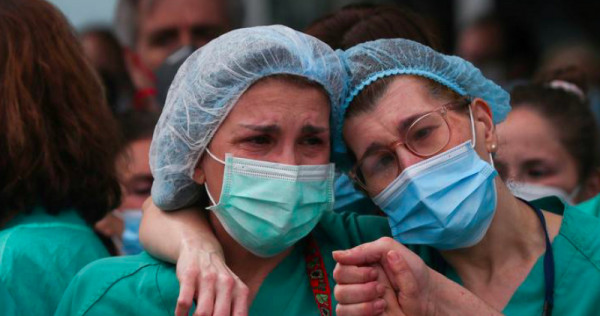 The Covid-19 pandemic has the potential to become a global mental health crisis, United Nations experts have warned, with many people under severe psychological strain.

“Psychological distress in populations is widespread … A long-term upsurge in the number and severity of mental health problems is likely,” the UN said in a policy brief on Wednesday.

The brief said the pandemic carried “the seeds of a major mental health crisis”, and many people were distressed by the physical isolation caused by social distancing, and fear of infection, dying or losing loved ones.

Nearly 300,000 people have died and over 4.3 million have been infected worldwide since the coronavirus was first reported in China late last year.

Anxiety about economic turmoil, and the potential loss of income and livelihoods was also affecting millions of people around the world.

“Those most at risk are frontline health care workers, older people, adolescents and young people, those with pre-existing mental health conditions and those caught up in conflict and crisis,” Guterres said in a video message launching the brief.

“We must help them and stand by them.”

The policy brief said surveys in different countries had also shown a high prevalence of mental distress – in China, 35 per cent of the population was in distress, while it was 45 per cent in the United States and 60 per cent in Iran.

For the Chinese study cited by the UN, published in in March, some 52,730 people were surveyed in 36 provinces.

Of the 35 per cent of respondents in distress, the worst hit were young adults who had obtained a lot of information about the outbreak from social media, elderly people who were more vulnerable to the disease, and migrant workers, according to the study led by Qiu Jianyin of Shanghai Jiao Tong University.

Migrant workers told the researchers they were worried about being exposed to the virus on public transport when they returned to work.

Kestel also pointed to past economic crises that had “increased the number of people with mental health issues, leading to higher rates of suicide for example, due to their mental health condition or substance abuse”.

Australian and British researchers have meanwhile suggested that the pandemic could trigger more severe mental illnesses, with a small number of Covid-19 patients potentially at risk of developing psychosis.

Their peer-reviewed paper, published in Schizophrenia Research on May 6, said an assessment of earlier studies on the coronavirus indicated that the incidence of psychosis in those infected ranged from 0.9 per cent to 4 per cent.

“Psychosis diagnosis was associated with viral exposure, treatments used to manage the infection, and psychosocial stress,” according to the study, led by researchers from the University of Melbourne and youth mental health organisation Orygen.

Psychosis is a condition in which people lose touch with reality, with symptoms like hallucinations or delusions, and it can be linked with schizophrenia and severe depression.

The paper said past studies had shown that social distancing, exposure to disease, financial stress and some treatments – such as certain steroids used during the Sars epidemic in 2002-03 – could trigger psychosis.

“Clinical management of these patients, where adherence with infection control procedures is paramount, was challenging.

“Increased vigilance for psychosis symptoms in patients with Covid-19 is warranted,” the researchers said.