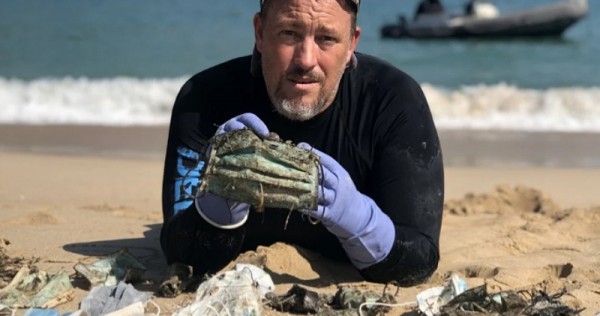 Wearing a face mask has become part of our daily routine, one of the preventive measures people have adopted worldwide to help slow the spread of the coronavirus.

But what may be good for our health may not be so healthy for the planet.

In a report released this week, OceansAsia says discarded face masks will result in an additional 4,680 to 6,240 metric tonnes of marine plastic pollution.

Titled “Masks on the Beach: The Impact of Covid-19 on Marine Plastic Pollution” the report says masks will take up to 450 years to break down, and have a negative impact on marine wildlife and ecosystems.

The report used a global production estimate of 52 billion masks being made in 2020, a conservative loss rate of three per cent, and the average weight of three to four grams for a single-use polypropylene surgical face mask to arrive at the estimate.

“The 1.56 billion face masks that will likely enter our oceans in 2020 are just the tip of the iceberg, says Teale Phelps Bondaroff, director of research for OceansAsia, and lead author of the report.

“Hygiene concerns and greater reliance on takeaway food has led to increased use of plastics, particularly plastic packaging,” Stokes says, adding a number of measures designed to reduce plastic consumption, like single-use plastic bag bans, have been delayed, paused, or rolled back.

Stokes says plastic pollution kills about 100,000 marine mammals and turtles, over a million seabirds, and greater numbers of fish, invertebrates and other animals each year.

“It also negatively impacts fisheries and the tourism industry, and costs the global economy an estimated US$13 billion (S$17.3 billion) a year.”

At the end of the food chain, plastic pollution also hurts human health.

Consider: Plastic breaks down into smaller and smaller pieces, known as microplastics.

Sea creatures ingest it, and it blocks their digestive tract, gets lodged in windpipes causing suffocation, or fills their stomach, resulting in malnutrition, starvation and potentially death.

Toxins from the ingested plastic transfer into the animal’s flesh and organs, and then into the people who eat the fish.

The main component of disposable single-use masks is polypropylene, a plastic derived from fossil fuels, and the masks are not recyclable.

“Since disposable face masks, including N95 masks and surgical masks, are made of composite materials of different kinds, and metals which are difficult to be separated, they are not suitable for recycling or discarding in recycling bins to avoid contaminating other recyclables,” Hong Kong’s secretary for the environment, Wong Kam-sing, said in a press release in May.

Based on the estimation that Hongkongers use four to six million face masks daily, and each face mask weighs two to three grams, the face masks disposed of at landfills every day will weigh from 10 to 15 tonnes, the government said in May.

The OceansAsia report called on people to switch to reusable masks and on governments to implement policies to encourage their use.

It also wants governments to foster innovation and the development of sustainable alternatives to single-use plastic masks.

It could be a tough ask.

A survey into mask wearing, released in September by financial comparison website Finder.com, found that Hongkongers prioritised function over fashion , with disposable surgical masks the most popular type; 47 per cent of the adult population said they owned at least one, followed by 18 per cent who had medical-grade masks and 14 per cent cloth masks.

The poll of 1,204 Hong Kong adults also came to some cultural conclusions: compared with 14 countries, Hong Kong had some of the lowest rates of adoption for fashionable, home-made and cloth face masks.