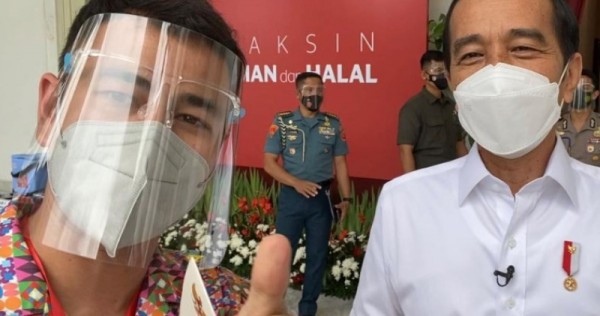 As President Joko Widodo launched Indonesia’s Covid-19 vaccination drive on Wednesday (Jan 13), the televised images beamed into homes across the nation were rich in symbolism.

Here was the president of the world’s fourth most populous nation quite literally opening his arms to China as he received a shot of the Sinovac Biotech vaccine his government had approved for emergency use just a couple of days earlier.

This was the moment that the Southeast Asian country hit hardest by the novel coronavirus – having recorded nearly 850,000 cases and just short of 25,000 deaths in a little over a year – started its fight back against a global menace.

A moment that, as Widodo put it, was needed to provide the “safety of all Indonesian people”, or as Health Minister Budi Gunadi Sadikin more effusively claimed, the safety of not only “families”, “neighbours” and “Indonesians”, but “human civilisation” itself.

It was fitting then that Widodo was flanked by the great and good of Indonesian society as the first doses were administered.

Alongside leaders from the military, police and religious sectors, representatives from all walks of life – health workers, a labourer, a market seller – received jabs in front of the cameras in an exercise designed to win over a public known to be sceptical about vaccines.

Yet on social media there was hint that at least one of these shots may have backfired. And it was nothing to do with the news from Brazil that the jab might only have a clinical efficacy rate of 50.4 per cent, significantly lower than the 65.3 per cent figure suggested by Indonesia’s food and drug agency.

Rather, the commotion was over the choice of one particular representative of Indonesian life.

Step forward Raffi Ahmad, a 33-year-old social media influencer, actor, singer and all-round celebrity known not only for his wealth, collection of luxury cars and love of travel but for failing to wear a mask when appearing on television.

But then as the invite from the Presidential Palace, which Raffi posted on the Instagram account he runs with his wife, actress Nagita Slavina, made clear, it was Raffi’s credentials as a “millennial” – rather than his mask wearing skills – that had put him on the list.

In a country where nearly 30 per cent of the 260 million population are aged between 10 and 24 years old, and where according to a recent World Health Organization survey just 57 per cent of people are willing to be inoculated, it’s hoped that Raffi’s involvement in the programme can help win over younger minds to the vaccination drive.

As Reisa Brotoasmoro, spokesperson of the government’s Covid-19 task force, put it, Raffi had been chosen as “a representative of the millennials who can hopefully inspire more Indonesians to be confident and get vaccinated”.

Given Raffi’s huge public profile, it might seem a not unreasonable tactic. Raffi is among Indonesia’s most followed public figures on social media. The Instagram account he runs with his wife has more than 49 million followers, more even than Widodo, who has “just” 37 million, while his YouTube channel has a further 18 million followers.

And Raffi has shown every sign of embracing the challenge, taking a selfie with Widodo straight after his inoculation and posting it on Instagram.

“Thank God I was among the first to be vaccinated today, with Jokowi. Thank you for your trust. To my beloved Indonesia, let’s get vaccinated, no need to be afraid,” Raffi said, using a popular nickname for Widodo.

Even so, Raffi’s position at the front of the inoculation queue ruffled feathers online.

On Indonesian Twitter , it prompted a discussion on whether celebrities could really influence the public when it came to significant health decisions and whether the government saw them as more important than health workers on the front line of the fight against the pandemic.

“Raffi Ahmad” began trending and as of Wednesday noon there had been more than 10,000 tweets mentioning his name.

“I still don’t understand why we have to be represented by Raffi Ahmad,” a Twitter user named Aro said.

“If Raffi Ahmad’s popularity is seen as potentially influencing people, rather than being vaccinated first maybe he should influence the people – and fellow entertainers – to wear their masks properly when they appear on TV”.

Laura Navika Yamani, an epidemiologist at Airlangga University in Surabaya, was also sceptical over how far Raffi’s influence would reach. She too criticised Raffi and fellow celebrities for appearing on television wearing only face shields and not masks.

“Just because Raffi Ahmad has been vaccinated it doesn’t mean that all Indonesians will follow his step, maybe only his followers will want to get vaccinated,” she said.

“There should be monitoring and further analysis on how influential celebrities are in getting people inoculated, so in the future we can decide on whether to involve influencers, and not just public figures, in programmes like this.”

Still, Raffi had his fans.

“Honestly, getting the president and Raffi Ahmad to be among the first to get vaccinated, live on TV, is a good move and in line with recommendations from behavioural scientists to increase acceptance and uptake of the vaccine in the long run,” tweeted Alanda Kariza.

For others, questions lingered, among them why Raffi had seemingly been prioritised over Widodo’s vice-president Maruf Amin, who at 77 is in a higher risk groups.