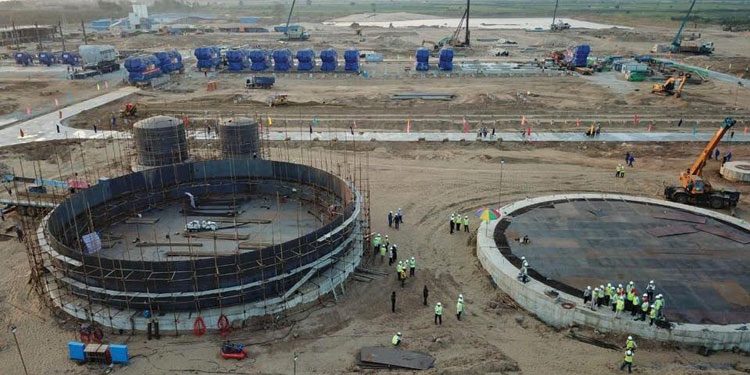 The heavy fuel oil-fired power plants in Kandal province’s Lvea Em district have started their engines and are generating power to the national grid, according to the Ministry of Mines and Energy.

The engines of the combined 400-megawatt power plants started power generation earlier this month, said Victor Jona, director-general of Energy at the Ministry of Mines and Energy.

“The plants have started power generation already, but they are not yet at their full capacity of 400 megawatts,” Jona said. The construction of the power project started in October 2019. It is composed of two plants.

One is powered by a 200mW generator made by the Finnish firm Wartsila. That plant was developed by Chinese firm CGGC-UN Power Co. The second plant also uses a 200mW generator, one made by Germany’s Man Group. It was  built by China National Heavy Machinery Corp (CHMC).

The project is projected to cost $380 million, with $300 million loaned by the government and the remainder coming from EDC’s own coffers.

The plants previously were designed to generate power by mid-2020, but the construction process was disrupted by the COVID-19 pandemic.

The two power plants will hit their full power generation once a shortage in power occurs, said Jona.

“Starting engines earlier this year created a small amount of power generation, but they will run at full power once there are shortages in the future This is because running a heavy fuel oil-fired power plant is costly compared with other power sources like hydropower dams,” Jona said.

National Bank of Cambodia (NBC) governor, named 2021 central banker of the year for the Asia-Pacific region