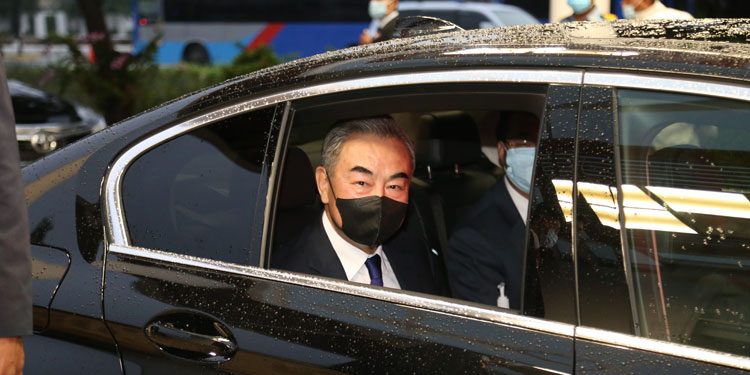 The Free Trade Agreement between Cambodia and China will  be signed during a two-day state visit by China’s Foreign Minister Wang Yi in Phnom Penh today, according to an official announcement on Saturday.

The announcement has ended months of speculation about the exact date the agreement would be signed after its original scheduled date of Aug 12, to be held in Beijing, was not met.

While no official reason was given for the delay it is thought that COVID-19 as well as large-scale flooding in China were to blame.

Khmer Times has been informed that Prime Minister  Hun Sen instructed officials to arrange the signing during the state visit but also suggested it could be arranged via video conference or Cambodia’s Minister of Commerce, Pan Sorasak, travelling to China.

According to the official announcement by the Ministry of Foreign Affairs and International Cooperation issued on Saturday, Wang will pay a courtesy call to Prime Minister Hun Sen and also meet Deputy Prime Minister Hor Namhong.

He will hold an official meeting with Prak Sokhonn, Minister of Foreign Affairs. Various fields of bilateral cooperation, as well as regional and international issues of common interest and concerns, will be discussed, the announcement said.

The FTA will list around 340 more commodities to be exported to China under the agreement.

According to the Ministry of Commerce, most of the products are in agriculture and agro-processing and are in addition to what Cambodia has received from the Asean-China FTA.

The 340 products will include items such as pepper, chilis, pineapples, vegetables, fruit, fish, meat (including processed), grain, crabs, seafood and a variety of canned products.

Among the additional 340 commodities in the Cambodia-China FTA, 95 percent of them will be untaxed. Taxes will be dropped on the remaining 5 percent in at least 10 years.

This article was first published in Khmer Times. All contents and images are copyright to their respective owners and sources.
﻿