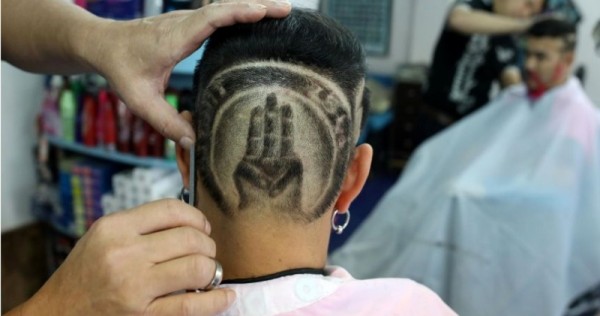 BANGKOK – Mr Mitree Chitinunda was such a devoted Thai royalist that he had the King’s portrait cut into his hair last year, but politics – like fashion and hairstyles – is changing in Thailand.

Mr Mitree’s latest hairstyle shows the Hunger Games salute of the pro-democracy protesters who are demanding reforms to curb the power of King Maha Vajiralongkorn in addition to a new prime minister and new constitution.

“I support all of the three demands,” said Mr Mitree, 48, who regularly joins the protests.

“The protests happened because people had enough,” he told Reuters.

“If we don’t get real democracy, we will not stop and I will continue to support and come to protest.”

Mr Mitree’s change of heart reflects the dramatic transformation in a country where reverence for the monarch is obligatory under the constitution, but tens of thousands of people have joined protests to demand royal reforms.

The government and royalist groups say loyalists remain in the majority, but there are no accurate opinion polls and protests that began in July have shown the strength of demands for change.

At first, youth protests sought only to remove Prime Minister Prayut Chan-o-cha, a former junta leader, but then broke taboos by calling for changes to the palace.

Protesters say they do not seek to end the monarchy, but to make the King accountable under the constitution, to reverse moves that gave the king greater powers and to reduce palace spending.

“The king is spending people’s tax in the wrong way. That’s why we need to reform the monarchy, but it doesn’t mean getting rid of the institution because we all love the King,” Mr Mitree said.

Asked about the protesters recently, the King said they were loved “all the same”.

Mr Mitree, a radiologist, had been a passionate royalist for decades, growing up in a country where the monarchy is promoted from schools to television to the giant portraits on streets.

But he said his mind was changed when he found out more.

“I have received a lot of information via the Internet, television or YouTube channels and weighed whether it’s true and it turns out it’s true,” he said.

Mr Warong Dechgitvigrom, leader of royalist group Thai Pakdee, said some people were being misled by social media, but he believes most Thais support the monarchy.

“I’m not worried about people who are changing sides that much because I believe 80 – 90 per cent of information on social media is fake,” he said.

Mr Mitree is known for his novelty haircuts, which he says help to put patients at ease.

The three-fingered salute of the protesters is on the back of his head while a peace symbol is on the left and dove on the right.

“I have to be a bit more careful wherever I’m going because some ultra-royalist people are ignorant, they don’t accept the truth,” he said.