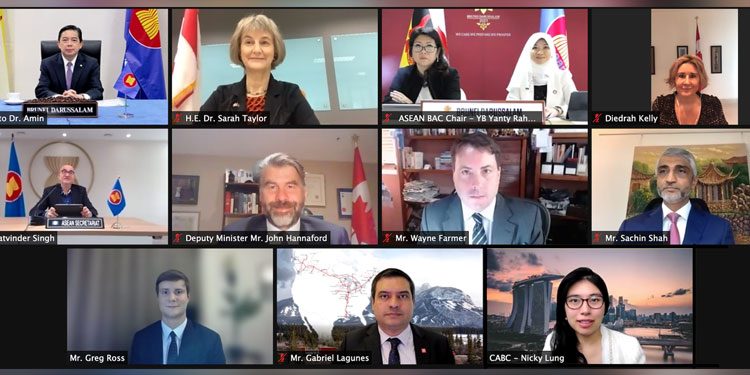 Canadian business leaders and diplomats predict that a potential free trade agreement (FTA) between ASEAN and Canada wouldn’t focus on only hitting lofty trade targets but also on raising the quality of life in the region and lifting its global profile as a whole.

Sachin Shah, the general manager of emerging markets at Manulife Asia,  said: “It’s fundamentally about how we improve the quality of life, the incomes [and] the economic outlook of both regions.”

Shah said Manulife is the largest provider of life insurance in Cambodia and that a potential FTA would create even more market potential for Manulife.

Canadian Ambassador to ASEAN Diedrah Kelly said while larger countries in ASEAN typically get most of the attention from investors, smaller markets such as Cambodia can offer great opportunities as well.

“There are also a number of opportunities for greater collaboration and growth in the smaller markets. If I think of Cambodia as an example, we have [National Bank of Canada] very active in Cambodia [via its ownership of Advanced Bank of Asia].”

Kelly said Canada could stand to increase its manufacturing imports from ASEAN by more than $3 billion if an FTA was signed, resulting mostly from increases in apparel, leather, transport equipment and electronics.

She said Canada does not often come to the forefront of people’s minds in ASEAN for ideal trading partners, but she hopes that will change and she said Canada’s proximity to the US is another reason why it has value as an import/export partner.

Gabriel Lagunes, the general manager for Canadian National Railway in Asia, said increased trade between Canada and ASEAN would invariably incorporate the company’s massive network of rail lines in North America and that the company has agents in Asia to discuss shipping logistics.

ASEAN represents an attractive business partner for Canada because of its 38 million population, increasing disposable income and its geographical  location, she said.

Canadian Ambassador to Thailand, Cambodia and Laos Sarah Taylor said Covid-19 has cast uncertainty over all sectors, but that an FTA would provide stable results over the medium to long term.

She cited the Thai government’s desire to improve infrastructure, including an ambitious plan to massively upgrade public transport in Bangkok, as an area where Canadian companies could provide valuable support.

She said Canada’s strengths in green technology, high technology and education were also sectors where Canada could assist ASEAN countries as they attempt to transition from export-driven economies to incorporate smarter and greener technology and move up the value chain.

“Canada has so much to offer for [the] emerging middle class in Thailand, Cambodia, Laos and elsewhere in the region: a great source of clean and healthy food that’s very reliable and dependable, a great place to educate your kids [and] a great source of know-how and information on building better housing and living setups for seniors,” Taylor added.

Kelly said Canada has taken surveys from the public and private sectors in Canada dating back to 2017 and they have proved that a Canada-ASEAN FTA has massive support.

The only concern, she said, was to get it signed quickly.

Addressing a question posed about potential human rights concerns in ASEAN states and how Canada would reconcile these with a potential FTA, Taylor rejected the notion that a country must choose between supporting human rights or doing business.

“That to me is a total false dichotomy,” she said, before adding that Canadian companies have a high reputation for social responsibility and abide by these standards wherever they operate.

Taylor mentioned the National Bank of Canada’s presence in Cambodia as an example of sharing information and regulatory practices to assist and inform emerging markets, something that she said is not only responsible, but helps local businesses to grow as well.

“These things really will lead to increased business investment and increased job creation,” he said. “Job creation to me, especially in ASEAN, and raising the quality of life for the individual [in the region], is something that is long-lasting and creates a sustainable business model for all of us.”