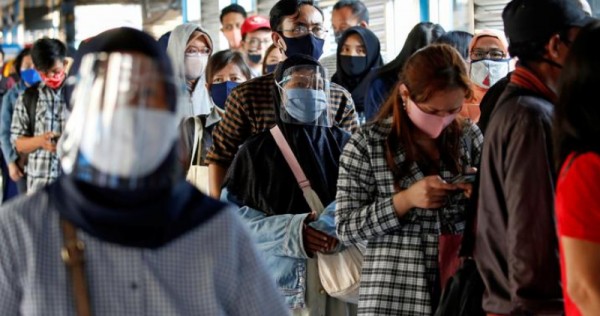 Under the stricter regulations, known locally by the acronym PSBB, most workplaces have to keep the bulk of their employees at home, and while shopping centres can remain open, no dining in is allowed.

Residents caught outside without masks will be tasked with social work or receive a fine that starts from 250,000 rupiah.

The restrictions will be in place until Sunday, but could be extended until October 11 if there is a significant increase in the number of Covid-19 cases – a possibility that deeply worries Yosef.

“Do not extend it again – pity those from the lower middle class,” said the 38-year-old father of two, adding that he had already borrowed money from his neighbours to get by.

Seven months after Indonesia reported its first cases, the country is struggling with mounting infections. It reported 4,071 new cases on Tuesday, bringing its total to 252,923, with 9,837 fatalities – the highest death toll in Southeast Asia .

Dicky Budiman, a researcher pursuing his doctorate in global health security and pandemics at Griffith University in Australia, pointed to statistics from the Jakarta administration showing that as of Monday, almost 13 per cent of residents had tested positive for Covid-19.

Restrictions should ideally be enforced for two to three months if that rate was above 10 per cent, he said.

“The PSBB should also be implemented in all of Java as a worst-case scenario,” he said, referring to the country’s most populous island, where Jakarta is located, and referencing the way travel to and from the capital had exacerbated the rise in infections.

The Philippines, by comparison, has tested around 29 people per 1,000 population, while Singapore has tested 155 out of every 1,000.

The country is actively involved in the search for a vaccine. Widodo has tasked local universities with its development, while state-owned drug maker Bio Farma has tied up with Chinese state-owned drug maker Sinovac to get at least 50 million doses of its vaccine by next March. Vaccine trials involving thousands of Indonesians have taken place in the city of Bandung.

While Indonesia remains closed to tourists, it has restarted official and business travel with the United Arab Emirates, South Korea and China.

Last month, it also began talks with Singapore for a travel corridor; Widodo has called for it to happen as soon as possible given the city state is a top source of foreign direct investment.

Yose Rizal Damuri, head of the economics department at the Centre for Strategic and International Studies (CSIS) in Jakarta, said it was imperative that the city contained its Covid-19 outbreak as it directly and indirectly contributed to about 60 per cent of Indonesia’s economy.

“Without a controlled pandemic, activity and demand will not increase,” he added. “There will be no business expansion and also people will save more than they spend.”

Under the current PSBB, he expected shopping centres in Jakarta’s central business district – including areas such as Thamrin, Sudirman and Senayan – to see at most 20 per cent of their pre-pandemic visitors, while establishments further out might see 30 per cent.

Before the pandemic, Alphonzus said, each of the 82 shopping centres in his association could report monthly transaction values of 150 billion rupiah, but this would fall given the lower foot traffic.

Yose of the CSIS said household consumption – which makes up about 57 per cent of GDP – would decline given the poor economic sentiment, adding that a recovery was uncertain but social discontent was likely to grow.

“This is also very risky for other social problems,” he said. “Crimes, or maybe even [unrest] on a larger scale … if confidence in the economy continues to decline.”