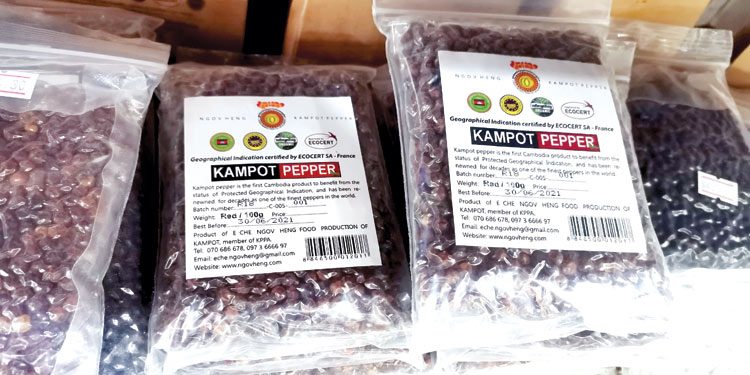 Cambodia’s famous Kampot pepper has faced export difficulties since receiving its geographic indicator (GI) certification from the European Union because of COVID-19 restrictions, according to the Kampot Pepper Promotion Association (KPPA).

Nguon Lay, president of the KPPA, said yesterday that since the outbreak of the COVID-19 virus, harvested pepper has had to be kept in storage because exports to the EU market have all but dried up.

“I hope that after recovery from COVID-19, the demand for the pepper will resume as usual. For now, the association just collects pepper from farmers who are the association’s members and keeps the commodity in storage,” Lay said.

However, the lack of income is starting to affect farmers who have had to stop hiring workers to harvest the spice.

“Farmers are being forced to stop paying workers to harvest the pepper because no exports can be sold during this time. In addition, because there are no foreign tourists, our domestic sales are rapidly shrinking,” Lay added.

Across the Kampot province, pepper plantations cover more than 290 hectares of land with the Pepper Promotion Association encompassing a total of 455 members, consisting of both farmers and plantation owners.

Previously, the main markets for Kampot pepper have been the EU, the US, Japan, China and South Korea. With the black pepper selling at $15,000 a tonne, while the red pepper and white pepper fetch $25,000 and $28,000 a tonne respectively, according to the association.

“Kampot Pepper” received GI certification from the EU in 2016. A geographical indication is a valuable name or sign used on products that corresponds to a specific geographical location or origin.

Last year, the association harvested a total 120 tonnes of the pepper of which approximately 40 percent was exported to foreign buyers.

No exclusive rights to import pigs from Thailand to Cambodia